'Now Is The Time To Be Vigilant': NOAA Adds More Storms To Hurricane Forecast

There’s a heightened chance that this year’s Atlantic hurricane season will be above average with more named storms and hurricanes than previously predicted, the National Oceanic and Atmospheric Administration said Wednesday.

The latest outlook for the six-month season, which began June 1 and ends Nov. 30, includes 15 to 21 named storms, seven to 10 hurricanes, and three to five major hurricanes reaching a category of 3, 4 or 5, NOAA said.

So far this year, there have been five named storms, one of which became a hurricane and was the earliest fifth-named storm on record. These past storms are included in the total number of storms forecast for the season. 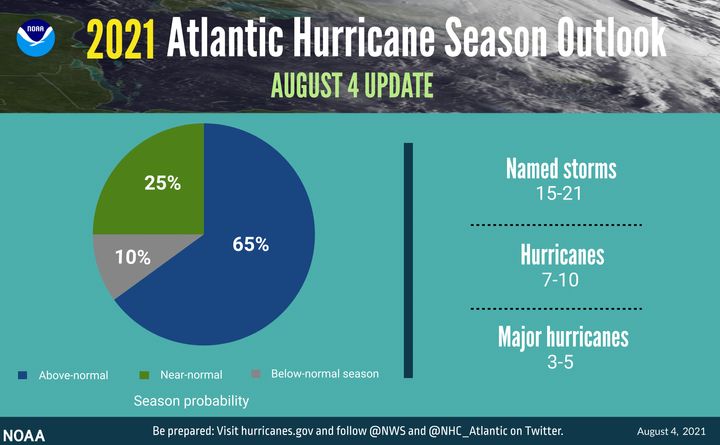 The 2021 Atlantic hurricane season is expected to be above average with 15 to 21 named storms expected, three to five of which could become major hurricanes.

“After a record-setting start, the 2021 Atlantic hurricane season does not show any signs of relenting as it enters the peak months ahead,” said Rick Spinrad, NOAA administrator.

NOAA’s latest forecast is a slight jump from the previous forecast it made in late May, when it predicted 13 to 20 named storms and six to 10 hurricanes. The number of major hurricanes predicted has not changed.

“Now is the time to be vigilant about your preparedness plans and potential actions,” Matthew Rosencrans, lead seasonal hurricane forecaster at NOAA’s Climate Prediction Center, said at a news conference. “As we have seen in recent years, threats from hurricanes are not limited to damaging winds but also dangerous storm surge and torrential rain and wind flooding.”

Overall, the likelihood of an above-normal 2021 season is now 65% ― up from a 60% projection in May. If the prediction is accurate, 2021 would be the sixth consecutive year to feature above-average storm activity in the Atlantic.

Fortunately, due to sea surface temperatures being closer to average across the Atlantic region where storms typically develop, this year is not expected to be as active as last year, said Rosencrans.

NOAA last month also issued a La Niña Watch, with a 55% chance of it emerging during the September-November period and lasting through winter.

Aug 4, 2pm EDT: The Tropics are getting more active with two primary disturbances. One is several hundred miles east of the Lesser Antilles, and the other should emerge off W Africa late tomorrow. It's time to regularly monitor the latest forecasts at https://t.co/tW4KeFW0gB! pic.twitter.com/lLltKQi5gT

This climate pattern tends to lead to drought in the southern U.S. and heavy rains and flooding in the Pacific Northwest and Canada. While it tends to suppress hurricane activity along the Pacific, it can lead to more and stronger  Atlantic storms, particularly in the latter half of the year, according to NOAA.

The chance of La Niña was factored into NOAA’s hurricane outlook for this year, said Rosencrans.

NOAA’s upgraded forecast comes as the National Hurricane Center monitors two disturbances brewing in the Atlantic. One of the disturbances is said to have the potential to turn into a tropical depression by early next week.

Jamie O'Hara: I don't think that anyone other than Manchester United, City, Liverpool and Chelsea will win the Premier League in the next 10-15 years
Carlo Ancelotti: Hazard is not at the level that we would like to see. It is not easy for him to play 2 matches in a row
Laporte was offered to sell Fati in the summer to register Messi. The president of Barca refused
Ronald Koeman: I wanted to go to Barca, but I didn't expect such problems. I am struggling and I do not regret that I came
Ronaldo got into the start of Manchester United in all 3 games after the transfer. He will play with West Ham from the first minutes
Golovin scored for the first time this season in Ligue 1, making an effective action in the 2nd game in a row
Messi and his family can move to a castle near Paris. The building is estimated at 48 million euros

SpaceX's Inspiration 4 crew was in orbit, but that doesn't mean they'll get astronaut wings

How Ivermectin Became The New Focus Of The Anti-Vaccine Movement

Will the Santa Monica-Malibu schools divorce go forward? Yes, but ....

France’s Macron to talk to Biden amid crisis over submarines

Why Older Couples Don’t Need Marriage to Have Great Relationships

After a sudden U-turn on a multibillion defense deal that caused anger in Paris, Australia's PM said that the country's 'national interest comes first'

Truck Driving Has Long Been A Man's World. Meet The Women Changing That