A prominent figure in the far-right group Oath Keepers bragged about having active-duty police officers among their ranks to help train.

Jim Arroy is the vice president of the Oath Keepers’ largest chapter in Arizona and made the boast in an appearance on 60 Minutes Sunday. He alleged that their group benefited from the expertise of law enforcement and service members. 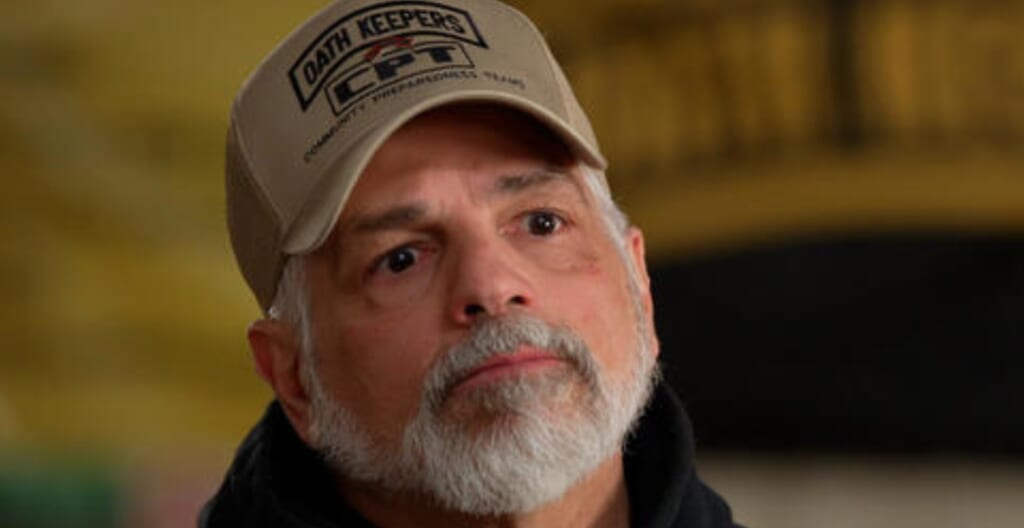 “Our guys are very experienced. We have active-duty law enforcement in our organization that are helping to train us,” Arroyo said. “We can blend in with our law enforcement ― in fact, in a lot of cases, our training is much more advanced because of our military backgrounds.”

Arroy also sought to distance himself from the Jan. 6 insurrection at the U.S. Capitol. Several members of the Oath Keepers were arrested for breaching the Capitol in an attempt to overthrow the certification of President Joe Biden.

Jon Schaffer, a metal guitarist and Oath Keeper, pled guilty to “forcibly entered the Capitol to, and did, stop, delay, and hinder Congress’s certification of the Electoral College vote” while in possession of a weapon. He will now be aiding the government in its investigation.

Stewart Rhodes, who founded the Oath Keepers in 2009, is under investigation by authorities for possibly helping plan the attack. Prosecutors have alleged that Rhodes was heavily involved in planning the military-style attack and issued a “call for action” on the Oath Keepers’ website, where he wanted patriots to show up in Washington, D.C., in support of former President Donald Trump.

“I want to congratulate Stewart Rhodes and his 10 militia buddies for winning first place in the ultimate dumb*ss contest, ’cause that’s what it was,” Arroyo told 60 Minutes. “That goes against everything we’ve ever taught, everything we believe in. It was pre-planned. It was pre-staged. Ten guys go and do something stupid, and suddenly we’re the devil.”

Photos and phone records place Stewart Rhodes, the founder of the far-right militia group the Oath Keepers, on the Capitol steps on January 6, but no charges have been brought against him. Rhodes declined to speak with 60 Minutes. https://t.co/6Sblb6l44F pic.twitter.com/rLcYRCKFZl

Former FBI counterterrorism official Javed Ali also appeared on 60 Minutes and stated that the training of the anti-government extremist group Oath Keepers made the job of law enforcement that much harder.

“I think what makes the Oath Keepers unique and challenging, beyond that they are a formal group with chapters all over the country, is that a large percentage have tactical training and operational experience in either the military or law enforcement.”

Arroy’s admission is critical as it has long been suspected that the police and armed forces have been infiltrated by those who harbor racist and bigoted views. The Brennan Center for Justice issued the Hidden in Plain Sight: Racism, White Supremacy, and Far-Right Militancy in Law Enforcement report which detailed their findings.

“Explicit racism in law enforcement takes many forms, from membership or affiliation with violent white supremacist or far-right militant groups, to engaging in racially discriminatory behavior toward the public or law enforcement colleagues, to making racist remarks and sharing them on social media,” the report stated.

FBI Director Christopher A. Wray reiterated in March the agency would not tolerate any of its members being associated with white supremacist groups.

“As we have said consistently, we do not and will not tolerate violent extremists who use the guise of First Amendment-protected activity to wreak havoc and incite violence,” Wray said in a statement.

Hit NBC drama ‘This Is Us’ to end after sixth season

Just like Michael Cohen, the GOP are Trump's 'fixers'

We're all paying the ransom for the Colonial Pipeline hack

Bill Gates told golf buddies that his marriage was ‘loveless’

The Most Anticipated Movies of Summer 2021

Gigi and Bella Hadid, other celebs express support for Palestine

Emily Blunt Shuts Down ‘Fantastic Four’ Casting Rumors: ‘I Don’t Know if Superhero Movies Are for Me’

‘The Story Won’t Die’ Review: Syrian Artists Face the Struggle of Surviving, and Creating, in Limbo

Man arrested in California while riding in back of driverless Tesla

Why This Round of Israeli-Palestinian Violence Feels Different

Robert De Niro to Star in Lionsgate Comedy ‘About My Father’

Increase Your Sales Conversions, Drive Leads, and More With These Website Widgets

Omar Calls Cheney ‘As Right-Wing As They Come,’ but ‘Shameful’ GOP Ousted Her From Leadership

37 million people are expected to travel this Memorial Day weekend

Asian Pacific American Heritage Month: How have you responded to microaggressions?

CDC panel recommends COVID vaccine for kids 12 and up

Chelsea Green wants to model for ‘Playboy’ after WWE release

Chip Roy weighs a last-minute challenge to Stefanik for House GOP No. 3

Gen. Keane: Biden must call out Hamas terror attacks on Israel 'without equivocation'

Florida Woman Posed As Student To Promote Her Instagram Page

How Actor Blair Underwood Gets Ready to Play a Role

David Bossie: Buckle up for Biden's next big crisis – our economy is in peril thanks to his radical agenda

US looking at how to weed out extremists in law enforcement

Tucker: Biden's making a mess of US economy

Battle between Israel and Hamas is an unwelcome surprise for Biden

Colton Underwood, first 'Bachelor' star to come out as gay, says he was blackmailed

Cheney to any Trump-backed challenger: 'Bring it on'

Schwab, Hill start strong at British Masters at The Belfry