At a stop in Orlando Tuesday, Obama specifically hammered President Donald Trump for his mismanagement and constant falsehoods about the COVID-19 crisis, which has gripped America for nearly nine months. 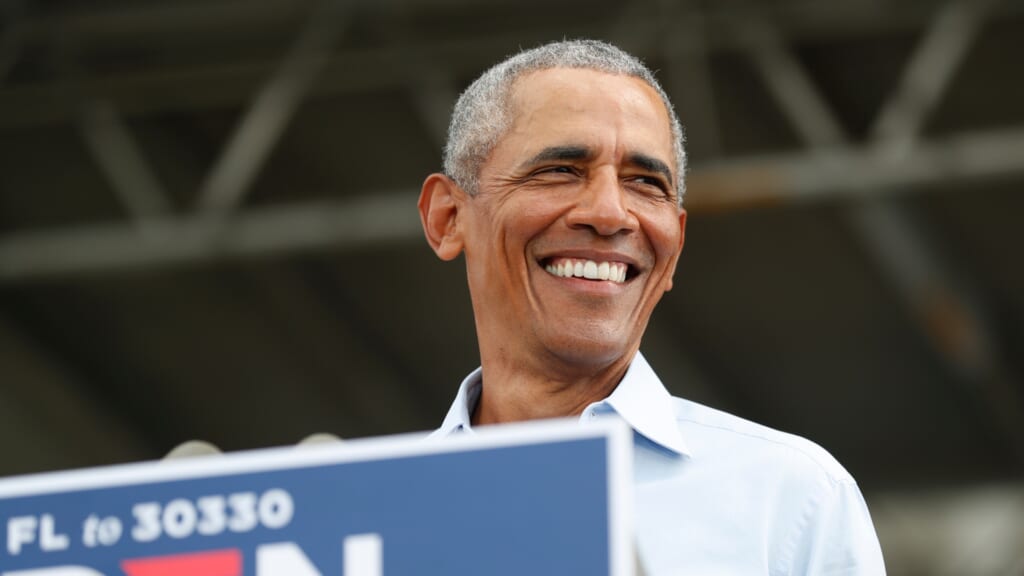 “More than 225,000 people in this country are dead. More than 100,000 small businesses have closed. Half a million jobs are gone in Florida alone. Think about that,” Obama told socially-distanced attendees of a drive-in rally at Camping World Stadium. “And what’s his closing argument? That people are too focused on COVID. He said this at one of his rallies. ‘COVID, COVID, COVID,’ he’s complaining. He’s jealous of COVID’s media coverage. If he had been focused on COVID from the beginning, cases wouldn’t be reaching new record highs across the country this week.”

Obama’s needling struck a nerve with Trump, who tweeted “Obama is drawing VERY small (tiny) numbers of people. Biden is drawing almost no one. We are drawing tens of thousands of people. You’ll see that again today. The Great Red Wave is coming!!!”

Read More: Trump’s $287M loans that he did not pay were forgiven

Trump continues to brag about his crowd size, not realizing that Democrats have smaller crowds in an attempt to prevent their events from becoming coronavirus super-spreader events.

The president attacked Biden on crowd size again while campaigning in the pivotal state of Pennsylvania this week, “He doesn’t leave his basement,” Trump said. “He’s a pathetic candidate.”

But Biden has said that large campaign events are “not appropriate” given the surge of coronavirus infections happening in the nation.

Read More: Marc Lamont Hill on why he’s voting Democrat instead of third party this election

President Obama also mocked Trump for trying to “act tough and talk tough.” He told Floridians to bring home a win for Biden on election night.

“That way I don’t have to stay up too late,” said Obama. “I don’t have to wait for the results through the next day. I want to go to sleep knowing that we’re going to have a president fighting on our behalf.”

Former presidents generally don’t openly criticize their successors, even while campaigning, but Obama has emphasized that Trump is no ordinary presidential successor.

He blasted Trump’s statements and behavior as “not normal.” He even compared him to the unsavory character, Florida Man.

Chiesa scored for the first time for Juventus-Dynamo Kyiv
Griezmann scored for the first time in 3 consecutive games for Barca. He has 5 goals in his last 7 matches for the club
Braithwaite has scored 5 (4+1) points in Barca's last 3 games. He had not scored in 13 games before
Pavel Nedved: Juventus doesn't depend on Ronaldo. Any team will miss such a player
Holand and Jan will not play Lazio due to muscle injuries
Van Persie about meeting Maradona: he kissed my left foot and said it was the same as his
Bale doesn't need to prove anything. His presence inspires the Tottenham players. Davis on the midfielder
Source https://thegrio.com/2020/10/28/obama-orlando-biden-trump/

VIRUS TODAY: Hospitals desperate for help as cases pile up

‘The Squad’ fires back at Obama over ‘defund the police’ critique

Thom Brennaman says he ‘embarrassed’ his family with anti-gay slur

Gwen Berry wins humanitarian award, insists US can do better

Who Was Selena? The New Netflix Series About the Singer Doesn’t Have a Clue

Steelers' Stephon Tuitt on game against Ravens following COVID postponements: 'Should be an easy one'

Here's the dumbest argument on 2020 vote fraud yet

Dortmund’s Erling Haaland out for a month with muscle tear

Uganda’s Wine Demands End to Interference in His Presidential Campaign

Here's how the first virtual Sundance Film Festival will work

Sundance Film Festival Director Tabitha Jackson On How 2021 Edition Will Play Out In Park City, Online And At An Art House Near You

5 of the Funniest Moments From Celebrity Game Face's Holiday Special