Nearly a dozen people – including a 15-year-old – were shot overnight after looting and rioting in Philadelphia erupted for a second straight night despite pleas for peace from the family of a Black man whose police-related death sparked the unrest.

About 1,000 people took the streets of the city of Brotherly Love late Tuesday night and into Wednesday morning purportedly to demand justice for the death of Walter Wallace Jr., who was fatally shot by police on Monday.

Instead, the protests quickly devolved into violent riots and looting of stores across the city. Crowds of dozens were seen ransacking local and big-name stores, including a Walmart and a Foot Locker.

Earlier Tuesday, Wallace’s father, Walter Wallace Sr., condemned any violence made in the name of justice for his son.

“I don’t condone no violence tearing up the city, looting of the stores,” he told reporters. “I would feel like everybody having respect for my family and my son to stop this violence and chaos that’s going on in this city with people that have businesses.”

He asked people to stop the violence "to help my son and help my family.”

“That all I’m sending out is an SOS, to help, not to hurt and cause no chaos, violence, looting, firing,” Wallace Sr. continued. “I wasn’t brought up like this and I worked 33 years with the city, with the street department picking up trash to try to keep this city clean.” 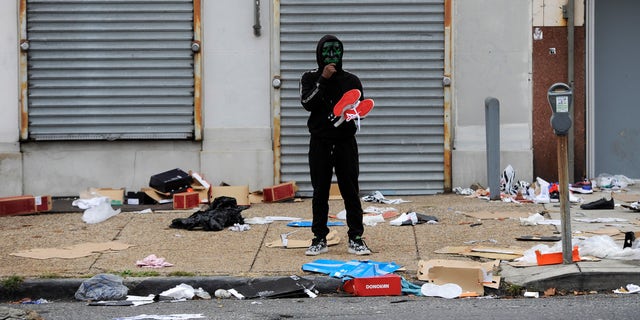 A man holds merchandise outside of a damaged store after protests, Tuesday, Oct. 27, 2020, in Philadelphia over the death of Walter Wallace, a Black man who was killed by police in Philadelphia. (AP Photo/Michael Perez)

The destruction seen in the city was, at times, coupled with violence and other crimes, local media reported.

At least 11 people were wounded during the overnight violence, with one Philadelphia officer saying: “Looters were shooting looters,” according to FOX 29’s Steve Keeley.

In one instance, thieves allegedly stole a 50-year-old man’s car after he had filled it with items that he had stolen from the stores, Keeley reported.

At least two of the wounded victims were juveniles, including a 15-year-old girl, according to the Daily Caller’s Shelby Talcott. 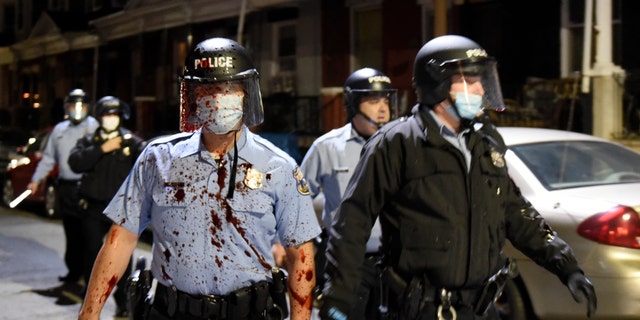 A Philadelphia police officer is covered with an unidentified red substance during a confrontation with protesters, Tuesday, Oct. 27, 2020, in Philadelphia. (AP Photo/Michael Perez)

By 9:40 p.m. Tuesday, Philadelphia’s Office of Emergency Management asked that “all residents” in certain areas of the city stay inside unless necessary.

“These areas are experiencing widespread demonstrations that have turned violent with looting,” the department wrote on Twitter.

Parts of the Pennsylvania city have seen civil unrest in the wake of the Monday afternoon police-involved shooting of Wallace Jr., a 27-year-old Black man whose family has said was experiencing a mental health crisis.

The shooting occurred before 4 p.m. as officers responded to a report of a person with a weapon, police spokesperson Tanya Little said shortly after the shooting.

Officers were called to the Cobbs Creek neighborhood and encountered the man, later identified as Walter Wallace, who was holding a knife, she said.

Police ordered Wallace to drop the knife, but he instead “advanced toward” them.

The officers were not armed with Tasers, Outlaw said. Each fired seven shots, though it was not yet clear how many struck Wallace, Chief Inspector Frank Vanore said.

A graphic video emerged that purportedly shows the moments leading up to the shooting. It shows officers pointing their guns at Wallace as he walks in the street and around a car. He walks toward the officers as they back away from him in the street, guns still aimed at him.

Wallace was hit in the shoulder and chest. One of the officers then put him in a police vehicle and drove him to a hospital, where he was pronounced dead a short time later, Little said.

But his parents said Tuesday night that officers knew their son was in a mental health crisis because they had been to the family's house three times on Monday.

The Wallace family's attorney, Shaka Johnson, said the man's wife, Dominique Wallace, is pregnant and is scheduled to have labor induced Wednesday. Johnson said Wallace Jr. had nine children — two briefly spoke at a news conference late Tuesday, along with his mother and father.

Police officials said they could not confirm what information had been given to the responding officers, whether they were told about a possible mental illness or how many calls they had received for help at Wallace's address Monday. Vanore confirmed that police had received a call before the fatal encounter Monday about a man screaming and saying that he was armed with a knife.

Monday night’s peaceful protests devolved into civil unrest, which led to the arrest of at least 91 people, 76 of whom were charged with commercial burglary, Outlaw said Tuesday.

Thirty officers were injured, most of them from being struck by projectiles such as bricks and rocks, according to preliminary information from police.

A 56-year-old sergeant was hospitalized in stable condition with a broken leg and other injuries after she "was intentionally run over by an individual driving a pick-up truck." The other injured officers were treated and released, Outlaw said.

Goodbye, Dad Buba Diop. Thanks to you, I lived the most memorable tournament of my childhood
Nuno about 2:1 with Arsenal: We played amazing, very proud. Jimenez recovered
Arsenal scored 13 points in 10 opening matches - the worst result in 39 years
West Brom can be bought by us investors. The Chinese owner of the club wants 150 million pounds
Lampard on Mourinho's words about ponies: You have Kane, Son, bale and alli. We are all fighting to win the Premier League
Mourinho on winning the Premier League: Tottenham are not in the race, because we are not a horse, but a pony
Laurent Blanc: I will return to football, but in children's. Now coaches are being asked to increase the cost of players, I don't like it
Source https://www.foxnews.com/us/looters-looters-philadelphia-unrest-walter-wallace?utm_source=feedburner&utm_medium=feed&utm_campaign=Feed%3A+foxnews%2Fnational+%28Internal+-+US+Latest+-+Text%29

Biden sees orthopedic doctor after spraining his ankle while playing with family dog.