Axon body cams captured Floyd's death at the hands of four fired Minneapolis Police officers. The company, which also makes Taser stun guns, said the incident horrified its workforce, compelling its engineers to brainstorm ways to prevent such situations and maximize transparency when they do occur.

"We are working on really important social problems," Axon CEO Rick Smith said in an interview. "We do have a responsibility to do it right."

The centerpiece of Axon's latest features is its "Priority-Ranked Video Audit" software, which the company says helps supervisors sift through the thousands of hours of body cam footage many of them receive on a weekly basis to zero in on potential abuses of power.

"The amount of footage is so overwhelmingly large, it's like finding a needle in a haystack," Kunins said.

Axon has also designed a "Use-of-Force Dashboard," which creates interactive reports on incidents in which a department's officers have forcibly restrained suspects.

The company notes that Derek Chauvin, the officer who knelt on Floyd's neck for nearly nine minutes, had 18 prior misconduct complaints filed against him over the course of his career. Kunins says complaints such as these often get overlooked because they're managed with a patchwork of documenting tools that don't always work in harmony with one another, suggesting Axon's new dashboard will make it easier to track officers like Chauvin who have patterns of bad behavior.

"All of these [new features] are means that would enable a department to be taking a much more proactive role in having data in their hands to see how their officers are behaving in a wide variety of circumstances and being able to drive changes to policy," he said.

In December, Axon plans to unveil a new virtual reality "Peer Intervention Training" system that prepares officers to handle confrontations with colleagues. In the George Floyd case, three of the officers who were on the scene have been charged over their alleged failure to intervene when their superior officer knelt on Floyd's neck.

"If we're going to actually get younger police officers to challenge a senior officer when he's crossed the line, that is going to require some intensive training," Smith said. "The intensity of what we can do in VR is going to be part of the shift that if you see somebody cross the line, it doesn't matter how old they are or how senior. They can take your livelihood in addition to the life of the person they're abusing." 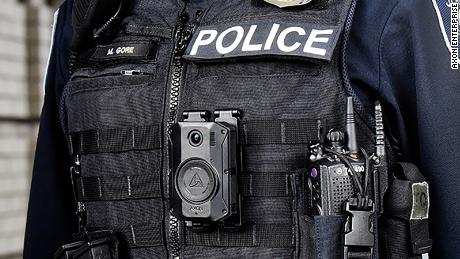 Axon points to multiple studies that show body cams reduce misconduct complaints and uses of force in policing. Smith says it's clear body cams and other surveillance technology has a role to play in eliminating police brutality.

"That doesn't mean these problems are going to go away overnight," he said. "I'm not aware of any civil rights group saying we don't want body cameras. They want them to be used and released more consistently."

Even as the technology improves, there are questions among law-enforcement experts over how much body cameras improve officer accountability. Additional surveillance doesn't ensure convictions or even charges when police are the suspects, notes Bowling Green State University professor Phillip Stinson, who studies police criminality.

Stinson points to several instances of police killing unarmed people on camera in what he said appeared to be "slam dunk" criminal cases that ended with non-indictments or hung juries.

"Whereas we thought body cams were going to solve a lot of problems, it just hasn't worked out that way so far," Stinson told CNN Business.

Chicago activist Bertha Purnell, founder of the anti-gun violence group Mothers on a Mission, is one of the community leaders Axon has tapped for insight on its latest tech offerings. She says the new features will help improve police transparency, but it only works when departments commit to releasing footage to the public in a timely manner.

"What's the sense in having it if you're not going to let it be seen?" Purnell said.

Goodbye, Dad Buba Diop. Thanks to you, I lived the most memorable tournament of my childhood
Nuno about 2:1 with Arsenal: We played amazing, very proud. Jimenez recovered
Arsenal scored 13 points in 10 opening matches - the worst result in 39 years
West Brom can be bought by us investors. The Chinese owner of the club wants 150 million pounds
Lampard on Mourinho's words about ponies: You have Kane, Son, bale and alli. We are all fighting to win the Premier League
Mourinho on winning the Premier League: Tottenham are not in the race, because we are not a horse, but a pony
Laurent Blanc: I will return to football, but in children's. Now coaches are being asked to increase the cost of players, I don't like it
Source https://edition.cnn.com/2020/10/28/tech/axon-body-cam-new-features/index.html