ROME — Pope Francis was an hour into a sprawling interview with a Mexican journalist at his Vatican residence in 2019 when he was asked if he had changed since his time as archbishop of Argentina, when he staunchly opposed gay marriage.

Francis responded that he had always defended the church’s teaching on marriage, then began to delve into the question of legalizing same-sex relationships when suddenly the video skipped forward. “One changes in life,” he said.

The words that went missing — expressing support for same-sex civil unions — surfaced only this week in a new documentary, stoking the hopes of gay Catholics and the fury of conservatives. But the clip also became the subject of sudden intrigue over when and where the pope made the remarks, and why they were only now being made public

Two people close to the company, who did not want to be identified while discussing such sensitive matters, said that the Vatican had required that the interview be filmed with Vatican cameras and that the Vatican be given control over the footage. The Vatican cut out the pope’s remarks on same-sex unions in the edited version provided to Televisa, the two people said.

Gone was this comment from the pope: “What we have to create is a civil union law. That way they are legally covered.”

The excerpt, which the two people said was never seen by the network, remained buried until the Church allowed a documentary filmmaker access to the Vatican archives, including the raw footage of the Televisa interview. The filmmaker put the clip in a new documentary — “Francesco” — that premiered this week at the Rome Film Festival.

The Vatican spokesman, Matteo Bruni, declined to respond on Thursday evening when asked whether the Vatican had tried to suppress the Pope’s potentially groundbreaking remarks. It remained unclear who at the Vatican would have edited the footage, or if Francis himself knew of the cut.

But the disappearance, then re-emergence, of footage of Francis weighing in on one of the most divisive issues facing the Roman Catholic Church raised questions about whether the pope’s handlers sought to silence his apparent approval of legal unions for same-sex couples.

Since the remarks surfaced Wednesday in the new documentary, they have been welcomed as a major breakthrough by liberal Catholics and L.G.B.T. activists, and reviled by conservative bishops as a contradiction of church teaching. The Catholic Church teaches that homosexuality is a sin.

The confusion over the provenance of the footage sucked in a host of players on Thursday — the ambitious, Oscar-nominated director of the film, Evgeny Afineevsky; a respected Mexican journalist with Televisa, Valentina Alazraki, to whom Francis presented a cake on the papal plane on the occasion of her 150th papal trip; and the Vatican’s own communications department, which has a tradition of secrecy, strict message control and often ham-handed execution. 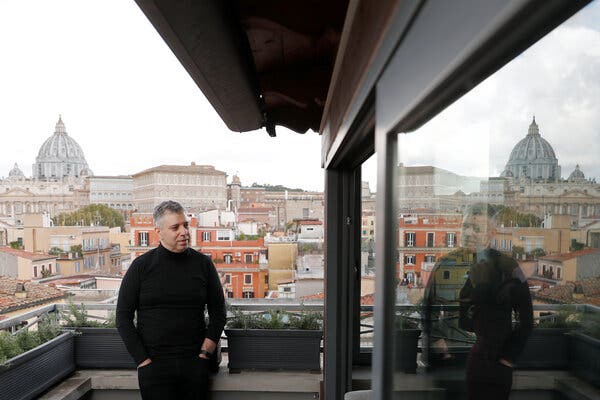 Almost everyone involved declined to comment or evaded questions of how the footage emerged.

The film’s director, Mr. Afineevsky, who had extensive access to the Vatican over years of production, told The New York Times on Wednesday that the pope had made the remarks in an interview with him.

But when the Vatican suggested otherwise, he did not answer repeated inquiries about where and when the pope made the remarks, or about whether he had instead recycled the footage from the Vatican’s cutting-room floor.

Ms. Alazraki, the Televisa correspondent, told The Times on Wednesday that she did not recall the pope making such remarks to her. By that evening, video began circulating among Vatican reporters of her nearly hour-and-20 minute interview with the pope on the environment, sexual abuse and plenty else.

The setting appears identical to the clip used in the new documentary. In both, Francis is seated in his residence in Casa Santa Marta on a gold-trimmed chair with a honey-combed pattern chair behind his right shoulder, and a small microphone in the same spot on his robe.

On Thursday, Ms. Alazraki referred all questions to her employer, Televisa, Mexico’s largest media conglomerate, which said in a statement that at the time of the interview she was focused on the pope’s comments on the sexual abuse scandal.

Ms. Alazraki’s reputation is hardly that of a pushover. In early 2019, she was invited to address many of the church’s leaders at a summit on sexual abuse, and used the occasion to warn the clerics that unless the church publicly admitted its sins instead of “playing ostrich,” then “we journalists, who seek the common good, will be your worst enemies.”

But Ms. Alazraki, who has covered five popes, is also operating in a Vatican media environment that follows Italian journalistic practices and ethics. In Italy, the line between press office and reporter is blurry; reporters often share questions in advance and allow sources to vet stories before publication.

And in the Vatican, officials also often require that the Vatican’s own cameras do the filming.

Valentina Alazraki, a veteran journalist from Mexico who covers the Vatican, with Pope Francis in 2017.Credit...Alberto Pizzoli/Agence France-Press, via Getty

But what is remarkable in this case is that the pope appears to have been censored in the Vatican’s postproduction process. It is also possible that the Vatican officials who worked closely with Mr. Afineevsky, the film’s director, clued him in to the cut footage.

The pope’s penchant for speaking in an off-the-cuff manner has maddened not only supporters and critics, but also his staff in the Roman bureaucracy. He has at times sought to circumvent his media office by personally granting and arranging his own interviews.

John Thavis, author of “The Vatican Diaries,” and a veteran church analyst, said some confusion was inevitable with Francis, who was purposefully breaking a centuries-old mold in which popes spoke in an extremely formal and controlled manner.

“He recognizes the headline he created yesterday is more important than all the footnoting and cleaning up that comes afterward,” Mr. Thavis said. “His goal is to set a tone, not a policy, so I don’t think he’s worried about the fallout.”

But perhaps someone in the Vatican communications office was.

Its major force is Andrea Tornielli, a former star Vatican reporter for Italian publications who has helped expand the power and footprint of the Vatican’s new communications department, leaving the press office, which it now oversees, weakened and out of the loop.

Another powerful voice is the Rev. Antonio Spadaro, a Jesuit priest and close ally of the pope, who has vigorously defended him against conservative critics on social media.

On Wednesday, Father Spadaro told reporters that the pope’s remarks had been contained in the Televisa interview — leaving it to be later discovered that those remarks never actually aired.

Both he and Mr. Tornielli declined to comment on Thursday.

Pope Francis speaking at the Vatican on Sunday. He is known for sometimes being more blunt than church officials would prefer.Credit...Tiziana Fabi/Agence France-Presse — Getty Images

Regardless of who may be trying to control the message at the Vatican, it has proved difficult with Francis.

“The Vatican attitude toward Pope Francis’ interviews is the same as the White House attitude toward Trump tweets,” said the Rev. Thomas J. Reese, a Jesuit priest and expert on the Vatican bureaucracy. “They would prefer a much more controlled message where they write the speeches and he reads them. He’s just not going to do that.”

Zidane on Maradona's death: a Huge loss for the world at large. He was unique
22 teams will participate in the FIFA Arab Cup. The tournament will be held in 2021
Ronaldinho on Maradona: Rest in peace, my idol. Wizard of wizards!
For the first time in 17 years, Liverpool did not score a goal in a home Champions League game
Villas-Boas suggested that in memory of Maradona to withdraw the 10th number from circulation in all teams
Vatican on Maradona: the Pope remembers him in prayer and remembers their meetings with love
Flick about 3:1 with Salzburg: Very happy with Bayern's performance. Neuer-world-class goalkeeper
Source https://www.nytimes.com/2020/10/22/world/europe/pope-same-sex-unions-mystery.html