Tensions escalated in Providence, R.I., late Tuesday night, after a weekend crash in which a police cruiser allegedly struck a moped rider, leaving the man in critical condition, according to reports.

At least 19 rioters were arrested as hundreds took the streets against local law enforcement. The overnight demonstration saw fireworks set off and objects, including glass bottles and rocks, thrown at police. At least one officer was injured.

"Tonight, the men and women of the Providence Police Department showed extreme professionalism while witnessing their city, yet again, be attacked by reckless protesters," Providence Police wrote on Twitter. "Our department is second to none, and we will face any and all matters of adversity head on, as we always do."

The unrest was prompted by a video, widely shared on social media, that allegedly showed a Sunday incident in which a police cruiser drove from behind into the moped of Jhamal Gonsalves, 24 -- a member of a local biker community -- sending him to the ground.

Some members of the community said the video showed that the cruiser hit Gonsalves, a Black man, but police said it wasn't clear yet if that was the case, according to the Providence Journal. They urged the public to hold off judgment. 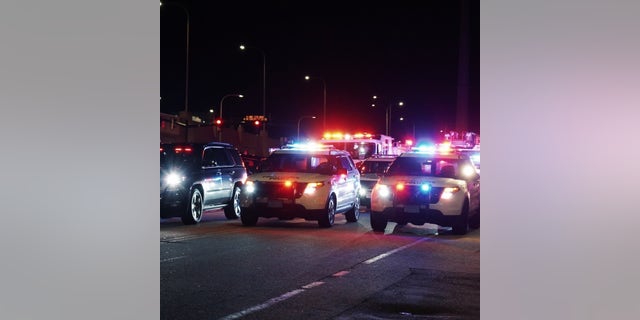 Gonsalves' mother, Tia Tribble Perry said he remained in a coma at a local area hospital on Tuesday, the paper reported.

Protesters on Tuesday originally began marching down Elmwood Avenue around 7 p.m., amid chants of “Justice for Jhamal,” and “Black Lives Matter."

Bikers revved their engines and burned rubber, which appeared to be their own way of showing support to Gonsalves, a professional dirt bike racer, according to a video on Twitter by Darren Botelho, a reporter with Providence's WLNE-TV.

Police and protesters eventually squared off when marchers arrived at the Providence Public Safety Complex just before 8 p.m., the Providence Journal reported. Officers in riot gear formed a line as protesters later pressed against metal gates.

Some of the protesters then chucked objects at the police line, as fireworks exploded in the area. The violent response came after Mark Gonsalves Sr., Jhamal's father, asked the crowd to remain peaceful, according to the paper.

Police continued to clash and push back protesters throughout the night. The crowd was told to disperse because authorities deemed the gathering was no longer a protest.

After the unrest subsided, Public Safety Commissioner Steven M. Paré said the department on Wednesday would release more information, as well as videos, of the incident, according to the paper.

Paul Gonsalves, 20, a cousin of Jhamal, called him an "amazing" and kind-hearted" person.

Real started with Alaves: stupid hand Nacho and wild pass Courtois-again defeat
20 shells of times of the Second world war found on the basis of the Roma
Zidane Ob 1:2 with Alaves: the Start of the match is the worst for Real Madrid in the season. We lack stability
A clear penalty! Oh, my God. Ramos and Carvajal on the fall of Hazard in the match with Alaves
Ex-referee Andujar Oliver: Marcelo was pulled by the hair, it was necessary to put an 11-meter shot. There was no penalty on Hazard
Favre Pro 1:2 with Cologne: They were sitting in defence and Borussia were in too much of a hurry. There were few chances
Real Madrid conceded after a mistake by Courtois on a pass. Forward Alaves scored in an empty net
Source https://www.foxnews.com/us/providence-protesters-police-face-off-after-moped-driver-24-allegedly-hit-by-police-vehicle

Brazen Killings Expose Iran’s Vulnerabilities as It Struggles to Respond

Alex Winter on Telling the Story of ‘Paradoxical’ Frank Zappa in New Doc: ‘It Took Us Years to Get it Right’

In Japan, more people died from suicide last month than from Covid in all of 2020. And women have been impacted most

In Japan, more people died from suicide last month than from coronavirus in all of 2020. And women have been impacted most.

Kamala Harris Gets A Big Laugh Out Of Another Trump Run: 'Please'

Adriana Cohen: Give teachers priority for COVID-19 vaccinations so schools can reopen

Every Broncos quarterback ruled out for game because of COVID-19

Protesters clash with police at Paris protest against police violence

An Oregon mink farm has reported a Covid-19 outbreak

12 times Trump really did say that awful, racist thing you thought had to be fake news

With Inaction By Washington, States Scramble To Offer Virus Aid

Trump continues fight in Wis., Pa.: ‘We have found many illegal votes’

Tourist Mails Back Stolen Roman Marble, Apologizes For Being 'An American A**hole'

155 arrested in London amid anti-lockdown protests

First doses of Pfizer coronavirus vaccine has flown to US from Belgium: report

2 hurt after rented red Ferrari wipes out on Chicago expressway

4 Ways Remote Communication Is Making For a Better Workplace

After rare protest in Cuba, artists say the government agrees to future talks

1947 Defense Department video warned against Trumpism: 'Don't Be a Sucker.'

Tony Hsieh, Longtime Chief of Zappos, Is Dead at 46