More than 130 House Republicans are demanding that House Speaker Nancy Pelosi "fully reopen" the House of Representatives, saying the failure to do so amid updated COVID-19 public health guidance is a "failure of leadership."

Fox News obtained a letter led by the top Republican on the Committee on House Administration, Rep. Rodney Davis, to Pelosi, D-Calif., on Tuesday, urging her to formally reopen the House of Representatives, just days after June 11 – when Washington, D.C. fully reopened and lifted restrictions put in place to stop the spread of COVID-19.

"We write today to urge you to fully reopen the House of Representatives," they wrote, noting that the Capitol and the House remain closed to the public, and that the House "continues to maintain policies that run contrary to science of COVID-19."

"It is time for you to reopen the House and get back to serving the American people," they wrote.

Republican members wrote that not only have weekly COVID-19 case numbers in the U.S. "reached their lowest point since March 2020," but that "every day, hundreds of thousands of Americans are being vaccinated."

The lawmakers noted that the Office of the Attending Physician has administered more than 10,000 COVID-19 vaccinations to the congressional community "with at least 95% of Senators, 84% of House Members, and 94$ of the House community at large vaccinated." 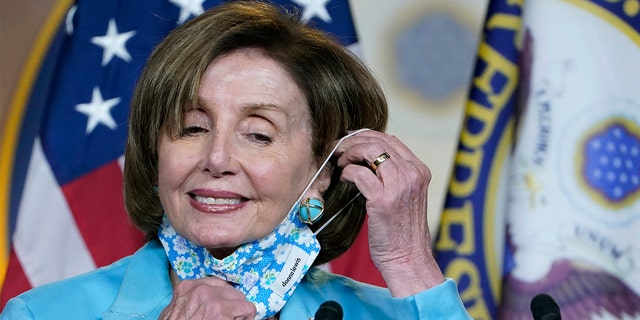 In this May 19, 2021, file photo House Speaker Nancy Pelosi takes off her face mask to talk to reporters on Capitol Hill in Washington, D.C.  (AP Photo/Susan Walsh)

"Despite the data and the facts, the Capitol and House of Representatives are still closed and people’s constitutional right to petition their government remains severely constrained," they wrote, adding that committee rooms remain closed, proxy voting remains in place, which, they say, "impedes Congress’ ability to get work done in an efficient manner."

"When asked directly, the Attending Physician could not provide clear metrics or a target percentage of vaccinations to fully reopen the House and said that he would defer to you to make such decisions," they wrote. "This comes as no surprise given the discrepancies between guidance issued to the Senate compared to guidance issued to the House throughout the pandemic, which has clearly shown that public health and science are not the driving factors in these decisions."

They added that "there has been a clear lack of leadership exhibited by the Majority that has led to a piecemeal approach to partial reopening by legislative branch entities, some of whom have no formal plan to reopen at all."

HOUSE FINES 4 MEMBERS FOR IGNORING MASK POLICY ON THE FLOOR, WARNS 7 OTHERS

"The failure to follow public health guidance and the best up-to-date scientific knowledge to reopen the House is a failure of leadership. The American people are the ones that are most negatively affected as a result," they wrote. "The Capitol and the House of Representatives cannot justify continuing to be closed to the public given the facts."

They added: "It is time to open the House and get back to work."

Last week, all capacity restrictions were lifted in D.C., including in restaurants, bars, nightclubs, entertainment venues and more.

The Centers for Disease Control and Prevention, last month, issued new guidance that fully vaccinated individuals are no longer required to wear masks indoors or outdoors, or physically distance, though it allows businesses and workplaces to set their own rules.

Pelosi, though, has somewhat relaxed the mask guidance so that members could take their face coverings off when they are recognized to speak on the House floor.

Meanwhile, there is no mask rule in the Senate chamber.

A spokesperson for Pelosi did not immediately respond to Fox News' request for comment.