Review: Whose news? Artist Kahlil Joseph's 'BLKNWS®' delivers what CNN or Fox do not

News channels like CNN or Fox broadcast all day, every day, on television screens mounted in public places all across American life. At the doctor’s office, in an airport lounge, at a coffee shop — you name it, cable news is not just in your living room.

The programming tends to be loud, graphically and otherwise. It lands somewhere between an occasionally jolting dose of infotainment, sometimes useful and often not, and a visual and aural distraction serving dull commercial ends.

Artist and filmmaker Kahlil Joseph’s self-described “conceptual news program,” which he began producing in 2018, is different from the sleekly produced merchandise of corporate television. Yes, his can be noisy too, and the pace of his editing is quick. But the stories don’t develop, they accrue. Joseph’s programming is textured and eccentric, which is not the stuff of cable. The whole is bigger than the sum of its parts.

“BLKNWS®" is part of “Made in LA 2020: a version,” the latest installment of the UCLA Hammer Museum’s biennial survey of new art. Co-sponsored this year with the Huntington Library, Art Museum and Botanical Gardens in San Marino, the show’s run has been postponed by the COVID-19 pandemic. Originally scheduled for the summer months, it should be a receding memory by now.

Joseph’s presentation was co-produced with Los Angeles Nomadic Division, which organizes site-specific public art exhibitions around the city. Nine venues host “BLKNWS®,” and the Hammer will become the 10th site when health restrictions that have kept the museum shuttered finally lift.

I visited four of them. Various mixes of the TV program are at each one, but perception of what’s on-screen shifted a bit depending on the circumstance.

Each “BLKNWS®" installation consists of two side-by-side TVs. The format alone tells you that multiple rather than singular viewpoints are unfolding. A pair of looped video-montages is composed from an array of footage, virtually all of it on subjects of Black life, past and present.

Much of it is found material gleaned from documentary films, home movies, recorded bits of broadcast television, Hollywood epics, music videos, shots from family albums and more. These are interspersed with new material — selfies, neighborly interviews, aerial drone shots of the city edited into gloriously unfolding kaleidoscopes and other homemade clips. 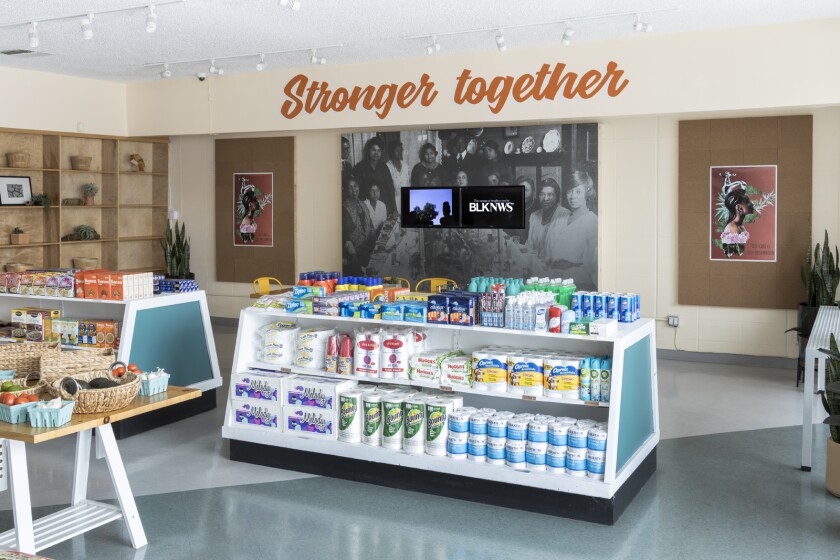 Kahlil Joseph, “BLKNWS®,” 2018-ongoing. The two-channel “fugitive newscast” is live at sites around L.A., including at Hank’s Mini Market in South Los Angeles, as part of “Made in L.A. 2020: a version.”

Periodically, pictures abruptly stop and simple aphorisms and familiar slogans turn up printed across the screen in blunt, sans-serif type. “We must rely on ourselves,” says one, while others promise “Emancipated space” and “The shape of things to come.”

Such unassuming notions aren’t exactly news. But they do serve another worthy function. Each snippet of everyday text is accompanied by a declaration that the statement is “brought to you by BLKNWS®.” The familiarity serves to bond a viewer with the artist and his images. It’s Joseph being sociable.

Every now and then the logo for BLKNWS® pops in, interrupting the flow and spinning in digital space. Two anchors — one male, one female; one Black, one white — also turn up, both dressed in a casual uniform of black jacket and white shirt.

Alzo Slade is a stand-up comic who is also a correspondent for “Vice News Tonight,” the Emmy award-winning nightly newscast. Helen Molesworth is an independent curator who organized a show of Joseph’s two-channel video “m.A.A.d.” in 2015, when she worked at the Museum of Contemporary Art. The choice of a comic and a curator as nominal anchors is inspired.

In this national election year, truth-telling has become a rare and exceptional gift for a society buried beneath an avalanche of lies. Comedy is funny when the ephemeral joke is built on a solid foundation of veracity. Picasso is purported to have described art as “a lie that tells the truth.” As anchors, the comic and the curator add ballast to the quotidian realities of Joseph’s diverse clips.

One of the shops I visited to watch “BLKNWS®" was closed when I got there. (Not all the venues have posted hours.) Two others — the fashionable Bloom & Plume coffee shop in Historic Filipinotown and the venerable Jamaican restaurant Natraliart in West Adams — offered an amenable ambiance for masked and socially distanced customers waiting to pick up their orders.

In both, “BLKNWS®" slipped seamlessly inside the city’s ebb and flow. A viewer’s daily experience merged with art being observed on the screens.

One drawback was that both shops also had music playing, which made the video soundtrack difficult to hear. (The visuals are still eye-catching.) Critic Hilton Als has called Joseph “a master of sound,” but you’d be hard-pressed to know it here.

That wasn’t the case at my fourth (and favorite) stop.

Hank’s Mini Market is in the Hyde Park section of South L.A., and it’s the most flatly beautiful neighborhood convenience store I’ve ever seen. (Founded by Henry Jackson nearly a quarter-century ago, it was recently re-envisioned by his daughter, artist Kelli Jackson.) The formal concept is simple: In a quintessentially clean, well-lighted place, baskets of fresh fruit and gleaming household products are lined up with acute precision on low shelves. Lush Pop artifacts are recast as rigorous Minimalist sculpture.

Most convenience stores are organized for a speedy in-and-out (hence the name). This one also accomplishes that essential task. But it’s such a lovely, carefully considered space that one wants to linger. Like “BLKNWS®,” Hank’s plays against type.

Joseph’s video screens hang by a shared table and chairs on an end wall that, in other times, sports a community bulletin board. No linear narrative — no beginning, middle and end — adheres to his “BLKNWS®" clips, which don’t convey Black stories, history or style in a conventionally journalistic sense. Instead, like the collaged newspapers on a Cubist cafe table painted next to a cup of coffee or a glass of wine, they have other, more sociable things in mind. “BLKNWS®" invites contemplation, which is something CNN and Fox rarely summon.

Dybala has not scored any points in this season's Serie A, he has played 6 matches
Giroud has 6 goals in his last 4 games. He has scored in his last 6 games in Chelsea's Premier League start
Solskjaer Pro 3:1 with West ham: Very happy with the game. Manchester United is getting more stable
Marcus Rashford: Manchester United will win more with more dry matches
Pirlo on 2:1 with Torino: after the break, we remembered that giving everything and sacrificing yourself is in the DNA of Juve
Juve have no defeats in the Serie A season: 5 wins, 5 draws
Ronaldo did not score in a Serie A match for the first time in the season. There were 8 goals in 5 games
Source https://www.latimes.com/entertainment-arts/story/2020-10-27/kahlil-joseph-blknws

US anti-doping bill signed into law

SAG-AFTRA Urges Fact Check on Healthcare Cuts: ‘You Are Being Misled’