Rob Reiner ridiculed President Trump on Tuesday, just one week ahead of the presidential election, with an assumption over his closing strategy.

Taking to his Twitter account, the 73-year-old actor and director once again surmised that Trump's plan to kill Americans boils down to his final rallies and alleged ignorance of coronavirus safety protocols.

"Trump’s closing strategy: Blanket the country with super spreader rallies and kill as many Americans as possible," Reiner claimed on the social media platform.

Reiner's tweet was met with similar criticism from his followers, who questioned how and why there are Trump supporters left in the country.

Hours later, following the Los Angeles Dodgers' World Series win, Reiner changed his tune to a bit of an empowering one for Democratic nominee Joe Biden.

"My Lakers won the NBA title. My Dodgers won the World Series. Now a Biden landslide will begin to salvage 2020," he said.

However, Tuesday is far from the first time Reiner has accused the president of being responsible for the deaths of Americans in 2020. Back in September, the filmmaker quoted an infamous line from the president delivered during his 2016 campaign in which he claimed he could shoot someone on Fifth Avenue and not lose a single vote.

7 CELEBRITIES WHO HAVE RAISED MONEY FOR BIDEN

“Donald Trump has essentially shot and killed 100s of thousands Americans on 5th Ave, continues to do it every day, and he’s right, his cult doesn’t care. But the rest of US do. In 42 days we will arrest the killer,” Reiner wrote.

He also used Trump's past downplays of the coronavirus pandemic to mock him when he tested positive for the novel coronavirus earlier this month, writing on Twitter, "That damn hoax."

In another rebuke made in June, Reiner called a vote for Trump "a vote for death."

The "This is Spinal Tap" director most recently called out Trump's Supreme Court justice nominee, Amy Coney Barrett, who was confirmed on Monday with a 52-48 Senate vote.

He spoke to Barrett's attendance of a campaign event for Trump after being sworn in.

"Immediately after being sworn in, our latest Supreme Court Justice attends a campaign event for a disgraceful desperate Sociopath. The Corruption is shamless," Reiner penned on Twitter. 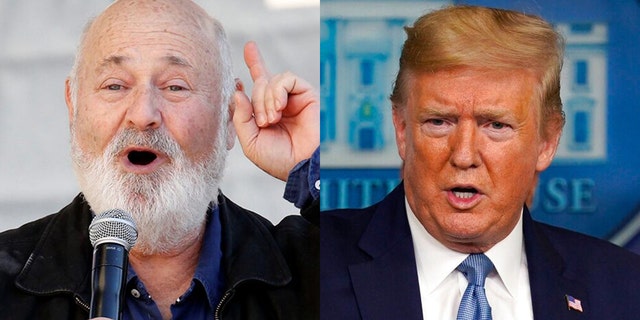 Director Rob Reiner has not been shy when it comes to bashing President Trump online ahead of the 2020 presidential election. (Reuters/AP)

Holand continues to insist that he is a monster. Fastest in the history of the Champions League scored 15 goals (and added 16)
Koeman on the victory over Dynamo Kyiv: We achieved our goal-we reached the playoffs
Solskjaer on 4:1 with Istanbul: Manchester United played intensely, enjoyed the match. We want to be 1st in the group
Forward Ferencvaros Troll Cristiano: celebrated a goal in his style. Ronaldo responded with a goal and a very angry look
Morata scored 5 goals in 4 games in the Champions League for Juve. His best result is 5 in 12 games in the 2014-15 season
Holand has scored 15 goals in the Champions League the fastest. 7 games better than the record
Ludicrous omission of the Champions League match: the Brugge forward did not want to transfer to the bus, and he was kicked out
Source https://www.foxnews.com/entertainment/rob-reiner-trump-closing-plan-kill-americans?utm_source=feedburner&utm_medium=feed&utm_campaign=Feed%3A+foxnews%2Fentertainment+%28Internal+-+Entertainment+-+Mixed%29