A second juror has come forward to speak about the continuing controversy surrounding the Breonna Taylor grand jury trial. The also anonymous juror says that he or she can confirm that murder charges were not even on the table for the grand jury to consider.

The second juror released a statement today through Louisville’s Glowgower law office, which is representing both jurors.

“The grand jury was only allowed to consider the three Wanton Endangerment charges against Detective Hankinson,” the statement read. “No opportunity to consider anything else was permitted. Anonymous Grand Juror #2 agrees wholeheartedly with the statement released on behalf of Anonymous Grand Juror #1 on 10/20/2020 and is looking forward to continuing to help set the record straight.”

New: The second anonymous Breonna Taylor grand juror has just released a statement agreeing with the other juror

Hankison. No opportunity to consider anything else was permitted" pic.twitter.com/CddfUku09Z— Roberto Aram Ferdman (@robferdman) October 22, 2020

As theGrio reported, the first juror who wanted the grand jury recordings released said that the jury could only consider wanton endangerment charges in the case, not any other charges for the three officers who participated in the raid that killed Taylor just after midnight on March 13. Det. Brett Hankinson was fired by the department in June because he didn’t follow established police policy in the botched raid.

Jefferson Circuit Judge Annie O’Connell granted the release request, saying that Louisville attorney general Daniel Cameron had already revealed much of what happened in the grand jury proceedings and that another judge had ordered the release of the recordings in Hankinson’s criminal case.

In an interview with Good Morning America, this week, Johnathan Mattingly, who was wounded when Taylor’s boyfriend Kenneth Walker fired at police thinking they were intruders, said that the case had nothing to do with race. He maintains officers serving the warrant were expecting Taylor to be alone in her apartment that night.

He contends that the police did announce themselves, though 10 of 11 of Taylor’s neighbors say they didn’t hear an announcement before police broke down the doors of the apartment. Mattingly is also the officer who sent an email to his fellow officers saying he believed they were being scapegoated in the case. The email was made public by Vice News. 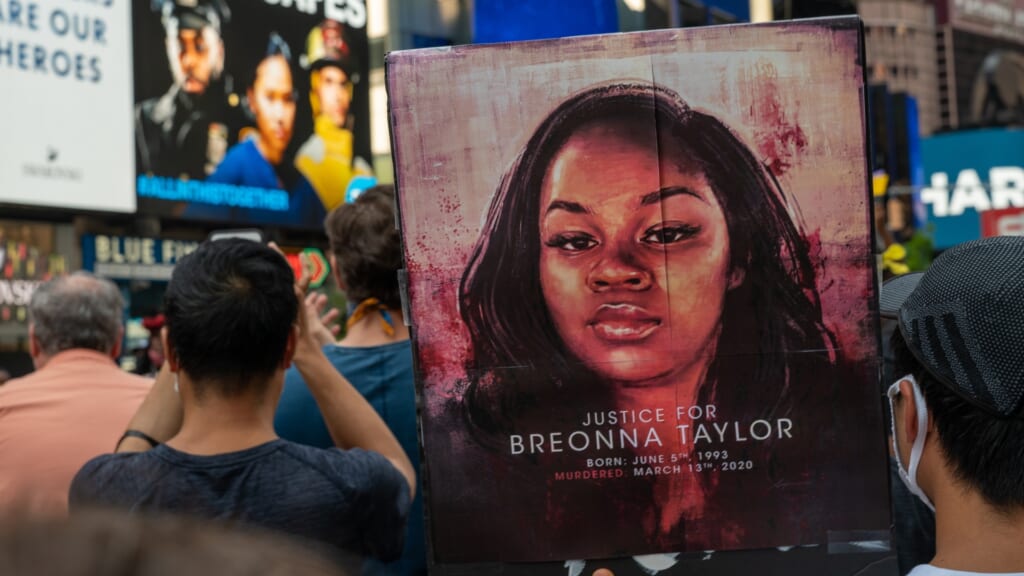 Protesters gather last month at Times Square to demand the arrest of the officers responsible for the death of Breonna Taylor in Louisville, Kentucky. (Photo by David Dee Delgado/Getty Images)

The fact that the grand jury was not even allowed to consider murder charges has obviously concerned the two jurors who have yet to be identified. O’Connell provided a caveat to her ruling, saying that they should be prepared to face the potential risk of exposure should they decide to go public.

Taylor’s case has drawn international support and generated worldwide protests, along with the death of George Floyd and the police shooting of Jacob Blake in Kenosha, Wisconsin. Though her family settled a $12M wrongful death lawsuit with the city of Louisville and were able to see some reforms put in place, including an end to ‘no-knock’ raids, they say their fight for justice and criminal charges for all the officers involved isn’t over.

Read More: Something is fishy about Daniel Cameron and the Breonna Taylor case

“At this point it’s bigger than Breonna, it’s bigger than just Black Lives,” Tamika Palmer, Taylor’s mother said this summer, according to the New York Times. “We’ve got to figure out how to fix the city, how to heal from here.”

Lineker on Liverpool: Huge praise for Klopp's spectacular performance despite injuries
Griezmann on the match with Argentina at the 2018 world Cup: Offered Deschamps 4-4-2 and personal custody of Messi. He listened
Ex-inter defender Maicon may move to Sona from Serie D
IFAB about playing with your hand: Not every touch of the ball is a violation. The final decision rests with the referee
Griezmann on leaving Atletico: I needed a change. The decision was very difficult
Barcelona was the name of Masserano to substitute for injured Pique. Javier refused (Eduardo Inda)
Inter want to sign Giroud in January
Source https://thegrio.com/2020/10/22/second-anonymous-juror-in-breonna-taylor-case-speaks/