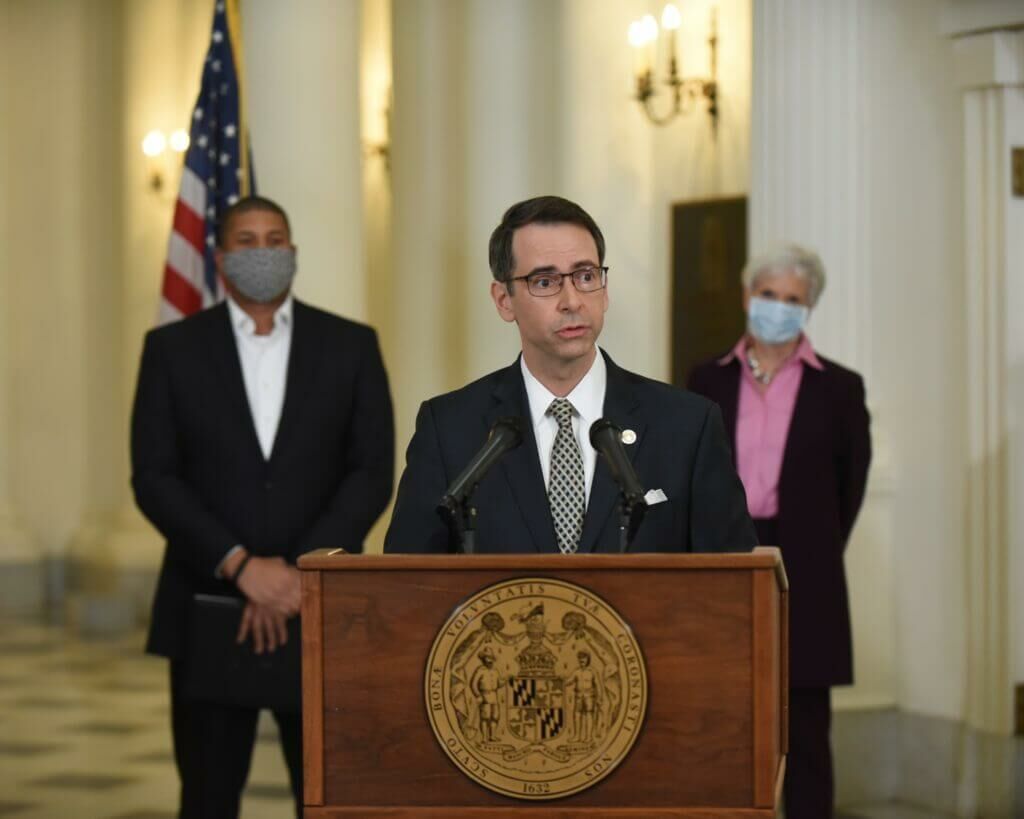 McGrath stepped down as Hogan’s top aide in August, following media reports that he pressed his prior employer, the Maryland Environmental Service, into awarding him a year’s severance when he left the quasi-governmental agency to join the governor’s team.

McGrath spent three years as CEO of the public works and environmental services agency before being tapped to serve as Hogan’s chief of staff.

The severance payout of $234,000 — along with more than $50,000 in travel, training and other expenses he was reimbursed for upon his departure — quickly became a source of controversy, and McGrath abruptly stepped down as chief of staff after just 11 weeks on the job.

Part of the controversy arose over whether Hogan had assured McGrath he was going to receive a severance payment from MES when he switched jobs. 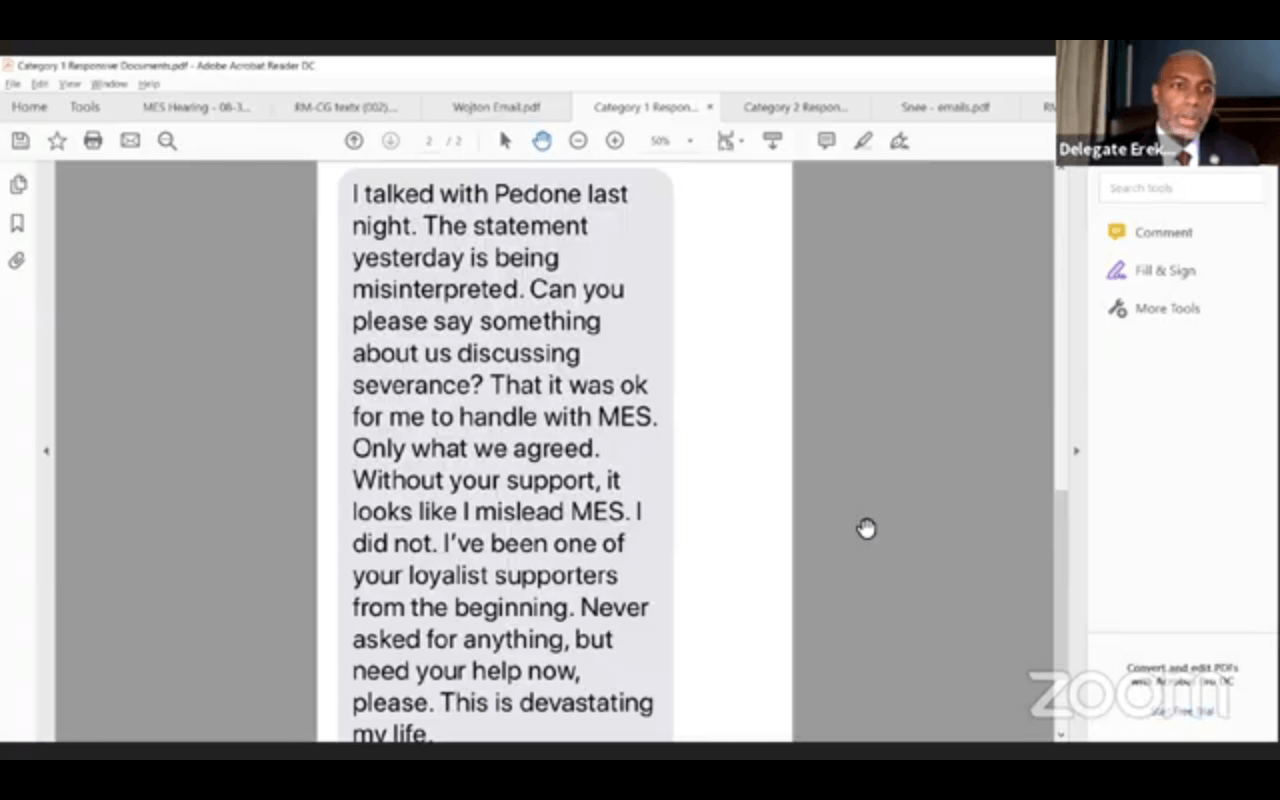 In testimony before the legislature’s Joint Committee on Fair Practices and State Personnel Oversight in late August, MES board members said McGrath repeatedly assured them Hogan “anticipated” the lucrative payout. They said they felt they were being squeezed and were reluctant to cross someone who was moving to an influential new role.

The governor has denied knowing about or approving the severance. McGrath penned an op-ed for The Baltimore Sun, which broke the severance story, defending the payout as customary and a reward for good performance.

“Severance packages are customary for both MES Directors and Acting Directors and is a long-established practice,” the agency said in a news release this summer — noting that McGrath’s predecessor, James Harkins, received $256,746 in severance when he stepped down in 2016 after heading the agency for 11 years.

Nearly all of MES’ revenues, an estimated 95%, come from county and municipal governments, officials have said.

In an interview on Thursday, Maryland State Prosecutor Charlton T. Howard III refused to confirm that his office has opened a probe.

“It is the official policy of our office not to comment on the existence or status of any investigative matter that may be within our purview,” he said. “We would not comment until there was a charging decision or a closure of the case, if there was a case.”

Raquel Coombs, a spokeswoman for Maryland Attorney General Brian E. Frosh (D), did not immediately respond to a request for comment.

McGrath’s attorney, Bruce L. Marcus also refused to confirm the existence of a probe. “Given the ongoing nature of the inquiry, this would not be an appropriate time for me to comment,” he said.

But the agency’s new acting executive director, Charles Glass, appeared to allude to the existence of some kind of investigation when he adjourned the public session of MES’ monthly board meeting on Thursday.

In moving the panel’s online gathering from open session to closed session, he listed — as is required by state law — the reasons for doing so. Among them: “to conduct or discuss an investigative proceeding on actual or possible criminal conduct.” He also said the board wanted to meet privately “to consult with counsel to obtain legal advice.”

The legal form Glass signed for complying with the open meetings law also listed “discuss an investigative proceeding” as one of four reasons to go behind closed doors.

In an interview after the session, MES spokesman Dan Faoro confirmed that “documents have been requested from various agencies.” He would not elaborate.

During his executive director’s report for the board, Glass stressed that he has not incurred any expenses since taking over for McGrath this summer.

“I continue to refrain from travel and business expenses, given the pandemic, to the greatest extent possible,” he said. Lawmakers faulted McGrath for traveling around the U.S. and abroad during his tenure and seeking reimbursements.

Glass noted on Thursday that he filled the agency’s vacant internal auditor position “way back in August.” Auditor Winsome Condra “has hit the ground running,” he said.

“As a response to all the inquiries into expenses, I discovered that there was no internal auditor at MES,” he said. “That position had been vacant for a while.”

The MES board, which now includes a retired judge named recently to the panel by Hogan, approved two resolutions on Thursday intended to clarify the agency’s expense reimbursement policy.

In addition to the newly-opened legal investigation into the controversial severance McGrath received, lawmakers are conducting their own inquiry.

Because MES and Hogan are represented by the Attorney General, the General Assembly recently hired Baltimore attorney Ward B. Coe to lead the probe of McGrath and a top ally at the environmental agency, former operations director Matthew Sherring. Unlike McGrath, Sherring has not spoken publicly about the controversy.

A veteran litigator, Coe’s first act was to issue subpoenas for both men and MES. The subpoenas seek a laundry list of documents and communications, due Oct. 23, along with their appearance at a hearing that’s been set for Oct. 29.

It could not be determined on Thursday how the new investigation will impact the General Assembly’s review of the payout.

Hazard was injured for the 8th time in 16 months at Real Madrid. He had 12 injuries in 7 years at Chelsea
Frank Lampard: Abramovich is a man who achieves his goals. Without this, it is impossible to achieve his position
Marcelo was actually grabbed by the hair. Clear penalty. Ex-referee Iturralde Gonzalez on the controversial episode in the match of Real Madrid
Gasperini on Atalanta's defeat: the Players are tired. We pay more for national team games than for the Champions League
Neymar on the draw with Bordeaux: PSG played timidly. If we don't win, it will be as difficult in Ligue 1 as in the Champions League
Real started with Alaves: stupid hand Nacho and wild pass Courtois-again defeat
20 shells of times of the Second world war found on the basis of the Roma
Source https://wtop.com/maryland/2020/10/state-and-federal-authorities-said-to-be-probing-hogans-ex-chief-of-staff/

Airlines get jump on preparations to transport COVID-19 vaccine

Diocese goes solar at churches and schools around Virginia

Sarah Fuller, With a Kickoff, Is the First Woman to Play Football in a Power 5 Game