Suddenly, These Law Clerks Were More Than Just Colleagues

Shampa Panda and Christopher Bryant both were law clerks in the federal courthouse in Charleston, S.C., when they first met, in 2016, and her frequent visits to his office did not go unnoticed by their co-workers.

“I think Shampa’s a little sweet on you,” Mr. Bryant’s boss told him.

But Mr. Bryant, 35, who both graduated and received a law degree from Duke, was buttoned up and proper, while Ms. Panda, 28, said that her primary interest in him was as a colleague of color in an otherwise very white courthouse. She had graduated from the University of North Carolina, Chapel Hill, and received a law degree from the University of California, Berkeley.

“Here I was coming from Berkeley law, had a strange sounding foreign name and was not passing as anything,” Ms. Panda said, explaining that she saw Mr. Bryant as someone who could help her navigate the city. “My roommate’s dog walker mistook me for the housekeeper.”

Both were working on high-profile cases at the courthouse that involved race. (His was the trial of Dylann Roof, who killed nine people at the Emanuel African Methodist Episcopal Church in Charleston in 2015; hers was the prosecution of Michael Slager, a police officer in North Charleston, S.C., who killed an unarmed Black man, Water Scott, the same year.)

“It felt like all eyes were on us, waiting for us to make a mistake,” Ms. Panda said.

Several years later, in April 2019, both Mr. Bryant and Ms. Panda attended a lecture in Montgomery, Ala., following the publication of a book written by the judge Mr. Bryant had clerked for in Charleston, and the two saw each other in a new light. 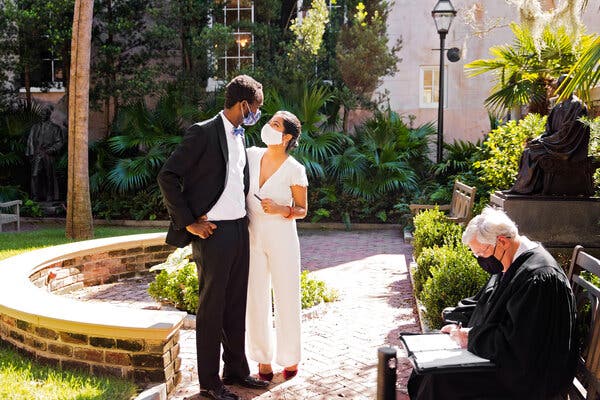 They had remained in sporadic contact after the conclusion of their Charleston clerkships, but it wasn’t until they were alone together in Montgomery that they saw each other as more than colleagues.

“We had this realization that we’re outside the city of Charleston, where we had our guard up,” Mr. Bryant said. “She was incredibly witty and not quiet and not reserved and almost a different person. It was just us.”

“He was thoughtful and earnest and not doing anything for show, which was something that was surprising for me,” said Ms. Panda.

That evening, the two shared their first kiss, and the following week, they had a formal first date that involved meeting at a Charleston bar, and then walking their bikes together from there to a restaurant.

“I fell in love that night,” said Ms. Panda, adding that falling in love was definitely not in her plan. “I thought, ‘I will do anything that it takes to give this relationship the shot it deserves.’”

She moved to Washington that fall to begin her dream job as a trial lawyer in the environment and natural resources division of the Justice Department. He moved to Washington, too. He is now a litigation associate in the political law group in Washington of Perkins Coie, a Seattle law firm.

On Oct. 17, the couple married in the garden outside the Charleston federal courthouse, with Judge Richard M. Gergel, for whom Mr. Bryant clerked, officiating, and Judge David C. Norton, for whom Ms. Panda had clerked, taking part. The livestream video of their event registered more than 400 views, but the ceremony included just the judges and the couple.

Another judge that had an effect on the course of their relationship was Supreme Court Associate Justice Ruth Bader Ginsburg, who died in mid-September. Her death led to a sudden but sure conviction for Ms. Panda.

“I was watching Chris maneuver this giant treadmill out of our home,” said Ms. Panda, who will use the surname Panda-Bryant. She had bought the equipment thinking she would use it regularly while working from home. She hadn’t, so she was selling it. Mr. Bryant was very patiently looking up, without judgment, how to take apart the treadmill so that it would be easier for its new owners to get it out.

As she watched him, she said: “You know what? Let’s get married. Life is short.”

Roy Keane: Tottenham's Players are not good enough to take the title
Maradona's Doctor: There was no medical error. I did everything I could
Milan will discuss the future of Braim Diaz with Real Madrid in the coming months
Goodbye, Dad Buba Diop. Thanks to you, I lived the most memorable tournament of my childhood
Nuno about 2:1 with Arsenal: We played amazing, very proud. Jimenez recovered
Arsenal scored 13 points in 10 opening matches - the worst result in 39 years
West Brom can be bought by us investors. The Chinese owner of the club wants 150 million pounds
Source https://www.nytimes.com/2020/10/30/style/suddenly-these-law-clerks-were-more-than-just-colleagues.html