USA
Trusted
An article was changed on the original website

Sunday's game between the Miami Marlins and San Diego Padres at Petco Park was delayed for 28 minutes after a swarm of bees settled onto a microphone attached to the netting near the Padres' dugout. The game was halted just after 4 p.m. local time, CBS San Diego affiliate KFMB-TV reports.

With Padres rookie Josh Naylor about to bat with two outs in the third inning, players began scattering. Marlins catcher Jorge Alfaro headed to the dugout and plate umpire Gerry Davis moved back from the field. Eventually all the players left the field.

An exterminator in a beekeeping suit arrived shortly after. He climbed a ladder and sprayed the bees, then used a shop vacuum cleaner to remove the dead bees and the grounds crew tidied up the area. 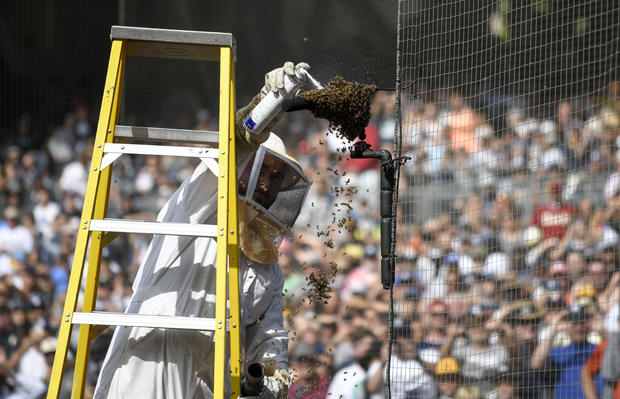 A beekeeper removes bees from a microphone behind home plate during the third inning of a baseball game between the San Diego Padres and the Miami Marlins at Petco Park on Sun., June 2, 2019, in San Diego, California. Getty 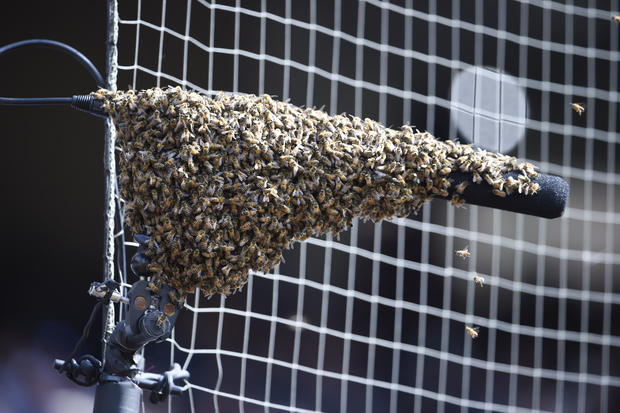 A swarm of bees covers a microphone behind home plate at Petco Park. Getty

Once the game resumed, Naylor flied out to end the inning.

This isn't the first time Petco Park has experienced what the Padres jokingly referred to as a "bee delay."

Bees swarmed an area of the outfield during a game against the Houston Astros on July 2, 2009. Once again, a beekeeper was called to attend to the insects, delaying the game for 52 minutes.

According to all known laws of aviation, there is no way a bee should be able to fly. Its wings are too small to get its fat little body off the ground.

The bee, of course, flies anyway, because bees don't care what humans think is impossible. pic.twitter.com/qP9Kcdml3X

Mark Clattenburg: I am amazed that Manchester United were not allowed to kick a penalty for an obvious play by the hand of Hudson-Odoi. How not appointed after VAR-a mystery
Lucas Vazquez asks to increase his salary by 15%, Real Madrid wants to reduce it by 10%
Arteta can lead Barcelona. He is Laporte's candidate
Ismailov asked Nurmagomedov to support Anzhi. Habib replied
Boyarintsev about the time in Nosta: The metallurgical plant was puffing at the top of its lungs. The sediment on the field fell out, sometimes
Fonseca about 1:2: Roma failed in the first 20 minutes and could not cope with the high pressure of Milan
Director of Akhmat about 1:2 with Dynamo: Logic is not always present in everything
Source https://www.cbsnews.com/news/swarm-of-bees-delays-mlb-game-padres-marlins-san-diego-petco-park-today-2019-06-02/

Why kids are hitting the pandemic wall

Opinion: Trump and his CPAC fans lead GOP down a losing path

Francisco Alvarez learning what he can from watching James McCann

Golden Globe Winner Chloé Zhao On Increased Violence Against Asian People: “People With So Much Hate, Maybe They Just Hate Themselves”

Julius Randle-RJ Barrett is electric duo Knicks have longed for