Swing-state Pennsylvanians are divided on fracking. Here’s why.

Natural gas fracking has been getting a lot of air time on the campaign trail in recent weeks.

In front of a crowd of thousands gathered in Erie, Pennsylvania, on Tuesday, President Donald Trump played a compilation of video clips in which former Vice President Joe Biden and Sen. Kamala Harris described their plans to transition away from fossil fuels.

“Joe Biden will ban fracking and abolish Pennsylvania energy,” Trump told the crowd, followed by a chorus of boos.

Hydraulic fracturing, or fracking, has allowed the US to dramatically increase its oil and gas production in Pennsylvania and various other states over the last decade. Biden’s plan to tackle climate change sets a target for the country to bring greenhouse emissions to zero by 2050, but it doesn’t call for banning fracking. During his town hall last week, Biden reiterated that he doesn’t intend to ban fracking.

Trump, who has no climate plan of his own, has been taking shots at Biden’s climate and energy initiatives as part of a broader effort to attract voters in battleground states. But his campaign has not seen a dramatic turnaround in Pennsylvania. Biden has maintained his lead in the polls — and is currently ahead by 6 percent on average, according to FiveThirtyEight.

Whether Trump’s pro-fracking talk will help his chances of reelection is unclear. Natural gas fracking is concentrated in Pennsylvania’s Republican-leaning counties, and 77 percent of Republicans said they supported the industry in an August CBS/YouGov poll. This means Trump’s rhetoric could energize his base; on the other hand, the same poll showed that 52 percent of sampled registered voters oppose fracking, so it may not win over suburban residents.

What is clear is that even as it’s become a focal point in the election, the fracking industry is struggling. An oversupply of gas has left producers in debt and jobs have declined. Fracking has also caused health and environmental damage in several states across the country, and is likely a major source of emissions of methane, an exceptionally potent greenhouse gas. Clean energy advocates say that a shift to investing in renewables would help to create a stable economy for a state that has long been dominated by the boom and bust cycles of extractive industries.

What happened to the natural gas boom?

Pennsylvania has been a key state in the fracking revolution, as companies have tapped into the Marcellus shale, the largest US gas field by proven reserves, which lies below much of its territory. Over the last 10 years since the boom began, it has become the country’s number two gas producer behind Texas.

In 2019, Pennsylvania produced a record amount of natural gas through fracking, but the growth in production belies the industry’s instability. The glut in gas has driven prices down and left even the top producers saddled with debt.

The fracking boom also has not created a huge number of jobs. According to statistics commissioned by the state’s Department of Environmental Protection, the natural gas industry, including extraction, transmission, and electricity generation, employed just under 24,000 people in 2019. Jobs in the sector have shrunk 7 percent since 2017, and only represent a tiny fraction of the state’s overall employment.

Of course, others have also benefitted from fracking, including landowners who have received royalties from companies drilling on their land, and services that support the natural gas industry.

But Rachel Meyer, a teacher who lives in the fracking hotspot of Beaver County along the state’s southwestern border, sees people growing less enamored. She also serves as a volunteer for the Beaver County Marcellus Awareness Community where she has learned about the environmental, health, and safety risks involved with fracking.

“I feel like we are at a kind of transition point now where people are starting to say, ‘Wait a second you know this seemed like a great thing, and we were really excited about it, but now we’re seeing some of issues and some really bad things starting to happen,’” said Meyer.

She first became involved in advocacy work around fracking when she heard about the explosion of Energy Transfer Corporation pipeline in her county back in 2018. The explosion, which officials linked to a landslide, luckily didn’t cause any casualties but it destroyed a home and left the surrounding area charred. Meyer said for her and many of her neighbors who have pipelines running in close proximity — or even through — their properties the incident was a wake-up call.

Fracking, which uses chemical-laced fluids to break open rock seams, has also led to some cases of water contamination and air pollution.

In late June, the state’s Attorney General Josh Shapiro released the results of a two-year investigation that widely condemned the industry for its pollution, and faulted the government for not holding corporations in check.

“The bottom line is, this was a failure,” Shapiro said at a news conference, according to the Philadelphia Inquirer. “Regulators were supposed to prevent abuse by the big corporations ... but they didn’t.” 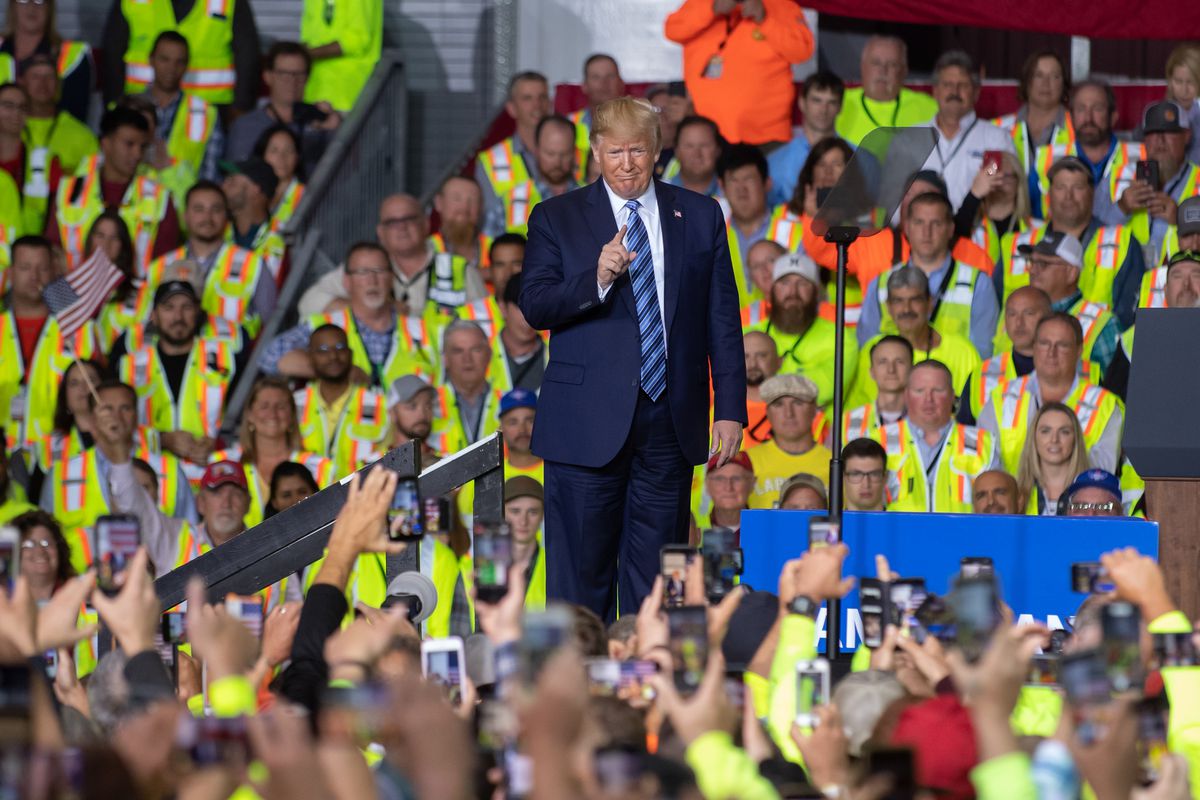 Trump speaks to contractors at the Shell Chemicals Petrochemical Complex on August 13, 2019, in Monaca, Pennsylvania. President Donald Trump delivered a speech on the economy, and focused on manufacturing and energy sector jobs.
Jeff Swensen/Getty Images

Evening out the energy playing field

Despite the downsides of the fracking boom, the state government has propped up the industry, most recently offering a massive tax break to Shell to build a major plastic factory that will make use of some of the extra natural gas in the state.

Josh McNeil, the executive director of Conservation Voters of Pennsylvania, which opposes fracking, said that it is time for the state to break free of extractive industries that have caused boom and bust cycles.

“Two months ago now, the legislature gave away a [$670] million handout to build petrochemical plants in the state, and they did that to create a market for natural gas. I’m not seeing anything like that for solar or wind.”

“We would like to see an even playing field that allows solar and wind, which in many cases are already cheaper than coal and gas, get the same kind of treatment.”

Recent polling shows that Pennsylvanians support increased electricity generation from renewable energy. But Meyer said that managing the transition away from fossil fuels is a concern for some. “Certainly there are people who, with good intentions, are concerned about the fracking industry leaving. And certainly there are communities who think, you know, we need this to come into our communities—there still is that.”

In this election cycle, this has led some workers to vocally support Trump and his pro-fracking stance. The Boilermakers Local 154 union have endorsed Trump and refuted Biden’s assertion in the last town hall that he had the union’s backing.

Other unions have been throwing their weight behind Biden, assuming that he will maintain the status quo.

Shannon Smith, communications and development manager at the nonprofit FracTracker Alliance said, “I’ve heard from union leaders recently that they aren’t going to vote for Trump because they trust that Biden is not going to instate a fracking ban,” which she adds wouldn’t even be feasible.

But ultimately she said natural gas production will have to come down. According to the Intergovernmental Panel on Climate Change, carbon dioxide emissions, including those from burning natural gas, have to be decreased to net zero by 2050 for the world to avoid the worst impacts of global warming. Biden’s climate plan calls for investment in communities that have been dependent on fossil fuels, which she sees as critical.

“We need candidates who are going to help figure out that transition because it will happen.”

Will you help keep Vox free for all?

The United States is in the middle of one of the most consequential presidential elections of our lifetimes. It’s essential that all Americans are able to access clear, concise information on what the outcome of the election could mean for their lives, and the lives of their families and communities. That is our mission at Vox. But our distinctive brand of explanatory journalism takes resources. Even when the economy and the news advertising market recovers, your support will be a critical part of sustaining our resource-intensive work. If you have already contributed, thank you. If you haven’t, please consider helping everyone understand this presidential election: Contribute today from as little as $3.

Zidane on Maradona's death: a Huge loss for the world at large. He was unique
22 teams will participate in the FIFA Arab Cup. The tournament will be held in 2021
Ronaldinho on Maradona: Rest in peace, my idol. Wizard of wizards!
For the first time in 17 years, Liverpool did not score a goal in a home Champions League game
Villas-Boas suggested that in memory of Maradona to withdraw the 10th number from circulation in all teams
Vatican on Maradona: the Pope remembers him in prayer and remembers their meetings with love
Flick about 3:1 with Salzburg: Very happy with Bayern's performance. Neuer-world-class goalkeeper
Source https://www.vox.com/21529260/fracking-biden-trump-2020-presidential-debate-climate-change