The Swagger of Denis Shapovalov

With a lefty forehand that crackles like a campfire, a stunning one-hand backhand and a backward baseball cap that dips to just above his eyebrows, Denis Shapovalov is a stirring reminder of the swaggering, swashbuckling days of Andre Agassi.

Shapovalov, 21, of Canada pumps his fist and bellows when he wins points, as he did when he upset David Goffin, who was ranked No. 10 at the time, to reach the quarterfinals of the United States Open in September, his best result at a major. It was enough to propel him into the world’s top 10 for the first time.

He followed that up by reaching the semifinals at the Italian Open and the semifinals of the ATP tournament in St. Petersburg, Russia, where he beat Stan Wawrinka before losing to Andrey Rublev.

A little over a year ago, Shapovalov was ranked outside the top 30, but then hired the former pro Mikhail Youzhny as his traveling coach. By the end of 2019, Shapovalov had won his first tour title in Stockholm and reached the final at the Paris Masters, before losing to Novak Djokovic.

Shapovalov also sings. He serenaded the crowd with his rap music after a match at the BNP Paribas Open in 2019. Just before this year’s U.S. Open, he debuted his rap song, “Night Train,” with the help of the fellow pro Corentin Moutet.

The following conversation has been edited and condensed.

How did all this rap stuff start, and who’s your rap influence?

My rap influence is G-Eazy. I’ve been listening to his music for years. During the lockdown I had time to write some lyrics and put together some songs. 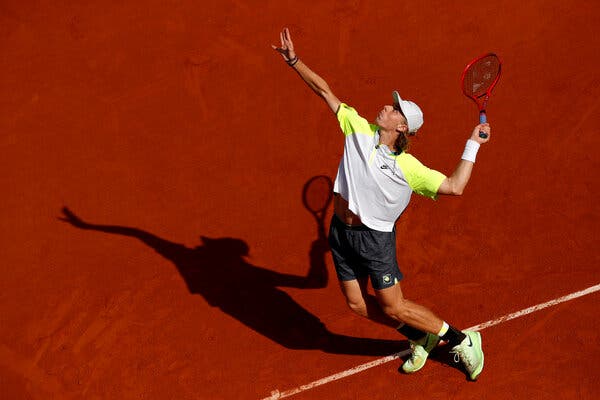 “Off court, I’m really laid back, but on the court I’m definitely not chill,” Shapovalov said. “I like to roar, like a wolf.”Credit...Clive Brunskill/Getty Images

In both “Night Train” and your other song, “Drip,” you speak of everybody wanting to be like you. So, what’s it like to be you?

[Laughing] That’s just a little flexing, or whatever, like in rap. But I feel like I’ve got a lot of fans that love me. People dress like me, grow their hair out, imitate my walk. In the beginning I was like, “What’s going on? Why are they copying me?” But it’s pretty cool.

You’re pretty creative and energetic on the court. Is there a blur between playing tennis and entertaining?

Honestly, it comes together. Off court, I’m really laid back, but on the court I’m definitely not chill. I like to roar, like a wolf. When I’m on court, I want to beat the other player, show him my teeth. I’ve been working a lot with my psychologist to mature into that wolf. That’s exactly who I try to be every time I step on the court.

Your mother coached you from the beginning, the same way Andy Murray’s mother did. What does she bring to the table?

She put a racket in my hand, knows my game as good as me, if not better. And she always keeps me levelheaded and puts me right back in my place when I’m not feeling good.

Three years ago, when you were just 18, you beat Rafael Nadal to reach the semifinals at the Canadian Open, your home tournament. What was that like?

I was staying with Felix [Auger-Aliassime] at his house, and I woke up the morning of the match and there was a poster of Rafa right there. I made a joke and said, “It’s gotta go." When I came home after the match Felix had taken it off the wall. A little bit of bromance began right there.

You had your best week in Paris last year. What happened to pull everything together for you?

When I started working with Mikhail we had conversations not just about tennis but about life. He helped me clear my head, enjoy the game and focus. I felt like I was playing well, but I had some tough losses and some tough draws. Then I went to Stockholm, and that’s where I felt like I peaked. I carried that through to Paris.

If you could have any rapper in your player box to watch you play the final of the U.S. Open one day, who would it be?

I think G-Eazy. He would be a cool guy to have in your box. He’d be chill; he’d play it cool.

Roy Keane: Tottenham's Players are not good enough to take the title
Maradona's Doctor: There was no medical error. I did everything I could
Milan will discuss the future of Braim Diaz with Real Madrid in the coming months
Goodbye, Dad Buba Diop. Thanks to you, I lived the most memorable tournament of my childhood
Nuno about 2:1 with Arsenal: We played amazing, very proud. Jimenez recovered
Arsenal scored 13 points in 10 opening matches - the worst result in 39 years
West Brom can be bought by us investors. The Chinese owner of the club wants 150 million pounds
Source https://www.nytimes.com/2020/10/30/sports/tennis/denis-shapovalov-swagger.html