The Woman President Who Wasn’t

One of my clearest memories of election night in 2016 is running into women who were going to watch the results with their daughters, so they’d get to share the experience of seeing Hillary Clinton elected president — the moment when the political glass ceiling in America would be shattered forever.

Well, you were there for what happened next: What? No! We need a recount! Abolish the Electoral College!

Yeah, it wasn’t fair. But it happened — and in the worst way possible. Not only did the first woman nominated for president by a major party lose; she lost to one of the most awful candidates in American history. A man whose personal relationships with women seemed to hark back to the 1950s, if not the cave. (“Grab ’em by the pussy. You can do anything.”)

We pretty much anticipated what would come next: Donald Trump would spend his term nominating judges who opposed abortion rights, limiting poor women’s access to family planning services and weakening paid family leave.

Nobody could have been surprised. For all his campaign promises, Trump’s record made it pretty clear he was not going to spend much time worrying about child care, no matter what Ivanka said or did, let alone equal employment opportunity for women. Plus, during the campaign we were introduced to 26 women who accused him of everything from unwelcome touches to rape.

“Every woman lied when they came forward to hurt my campaign,” Trump assured his supporters in 2016. “Total fabrication. The events never happened. Never. All of these liars will be sued after the election is over.”

“The patriarchy could not have had a worse representative,” mused Gloria Steinem, trying to look on the positive side. Four years of Trump, she said in a phone interview, “illustrated what’s wrong with the country at a very high level.” It brought most Americans around to a better understanding of the need for reforms, and perhaps a whole new way of getting them.

The women who suffered most in the age of Trump were, of course, the ones with the least money. And it’s getting worse. The rate of job loss during the pandemic was three times as bad for mothers of small children as it was for their male equivalents.

Feel free to blame it on the president — both for his failure to respond quickly and firmly to the virus and his almost total lack of interest and ability in helping Nancy Pelosi propel enough pandemic aid through Congress.

But there’s another side to the story. Everything bad for women that Donald Trump represented brought more women into the world of American politics. A record number ran for office in 2018, and a record number won.

“He energized women in ways we haven’t seen before. Right out of the gate,” said Debbie Walsh of the Center for American Women and Politics.

That chapter is, obviously, unfinished. The future will look back on Hillary Clinton not solely as a defeated presidential candidate, but as one who got the American public used to the idea that women would run, and sooner or later, get elected.

When Joe Biden introduced Kamala Harris as his running mate it was another big leap in that direction — particularly because of the absolute delight with which most Democrats greeted the choice. 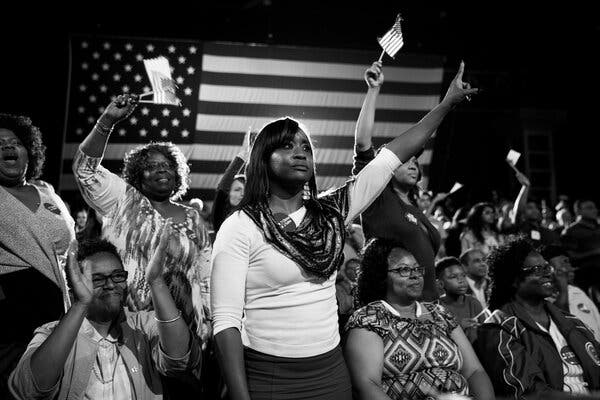 And in this terrible time of pandemic, confusion, economic crisis and useless presidential leadership, women all around the country are picking up the proverbial gauntlet. A record 60 filed to run for one of the 35 Senate seats up for election this fall. Nearly half are still in the running; 20 have already won primaries.

The country’s fascinated by the contest in Maine between Susan Collins and her Democratic opponent, Sara Gideon, the powerful speaker of the State House of Representatives. But almost no one thinks it’s remarkable that it’s a race between two women.

Not every female candidate is going to triumph in November. But just thinking about the possibility of Texan M.J. Hegar beating the Senate’s former deputy majority leader, John Cornyn, is delicious, however small the chances of an upset. And when you talk about tasty, you can’t help but fantasize about Amy McGrath knocking out Mitch McConnell in Kentucky.

Two things about those particular contests: Both Hegar and McGrath are veterans — Hegar served in the Air Force in Afghanistan and McGrath flew combat missions for the Marine Corps. We seem to be seeing more and more female candidates with résumés that include time in the armed forces.

That used to be a powerful part of many men’s biographies — just like time spent leading state legislatures, or an extremely supportive spouse who was ready and willing to take over the bulk of the family’s domestic duties.

The women who are running on the Democratic side this year often have a big advantage in being able to rally the troops against an unpopular president. Moderate Republicans are mainly stuck with dodging the issue — in Maine, Collins has avoided telling her constituents whether she’s voting for Trump’s re-election.

Maybe we’ll look back from a future world where a woman is in the White House and wonder if experiencing four years on the dark side with Donald got us there a little faster.

The Times is committed to publishing a diversity of letters to the editor. We’d like to hear what you think about this or any of our articles. Here are some tips. And here’s our email: [email protected].

Borussia Dortmund presented a collection with Spongebob as part of a deal with Nickelodeon
Woodward on Manchester United and trophies: there is a lot of work Ahead to achieve the stability needed
Neuer - best goaltender in 2020, Alisson-2nd, Oblak-3rd (ESPN)
Liverpool are Interested in 21-year-old Leipzig defender Konate
Niko Kovac: I'm Waiting for Golovin to return. But it might be better to wait another week or two
Suarez's Italian language examiners were suspended for 8 months. An investigation is underway against the Director of Juve Paratici
Zinedine Zidane: I Never felt untouchable at Real Madrid. Criticism is normal
Source https://www.nytimes.com/2020/10/30/opinion/trump-clinton-women.html

Chicago-area vaccination sites will be at hospitals, clinics, pharmacies — but also drive-thrus at schools, parks and maybe Six Flags

Developer had big plans for land polluted by the steel industry on Chicago’s Southeast Side. Instead, he flipped the property for millions, and now taxpayers likely will pay for the cleanup.

3 gunmen, weapons drawn, confronted retired Chicago firefighter. He pulled out a revolver and was shot dead.