‘They’re Calling You on the Squid Phone’

Earlier this week, and more than 2,700 feet underwater by the northern Great Barrier Reef, a remotely operated vehicle named SuBastian engaged in a stare-off with a burrito. That’s what the creature looked like from a distance: an untoasted cylinder floating eerily upright in the ocean’s twilight zone, like takeout from Triton.

Above the waves, in the control room of a Schmidt Ocean Institute research vessel, the pilot, Jason Rodriguez, and the co-pilot, Kris Ingram, navigated SuBastian closer to the unidentified floating object, which spurted and wiggled away several times before coming into focus. The animal was about as long as a breakfast sausage, with wafer-thin fins and one large, searching eye.

“What on earth?” muttered Dhugal Lindsay, who was sipping his morning coffee in his office at the Japan Agency for Marine-Earth Science and Technology, or Jamstec, in Kanagawa. Dr. Lindsay, a marine biologist, had Zoomed in to narrate a YouTube livestream, which had already spotted a 16-tentacled jellyfish and an Apolemia siphonophore, a colonial animal that resembles a string of fairy lights. Dr. Lindsay’s Zoom feed was fuzzy, and the burrito creature initially seemed a mystery.

The day before, SuBastian had discovered a coral reef taller than the Empire State Building, leaving the lead scientists caught up in back-to-back interviews in the other room. So Valerie Cornet, a master’s student in marine biology at James Cook University, subbed in to narrate alongside Dr. Lindsay. Just before the creature wiggled offscreen, Ms. Cornet speculated that it could be a squid.

Meanwhile, at about 10:30 p.m. in Washington, D.C., Mike Vecchione was getting ready for bed. A zoologist at the Smithsonian National Museum of Natural History, Dr. Vecchione had been watching SuBastian’s dive but called it a day when the feed glitched. Suddenly, he recalled, a phone buzzed with a message from a colleague, the biologist Christopher Mah: “Mike Vecchione, they’re calling you on the squid phone.” 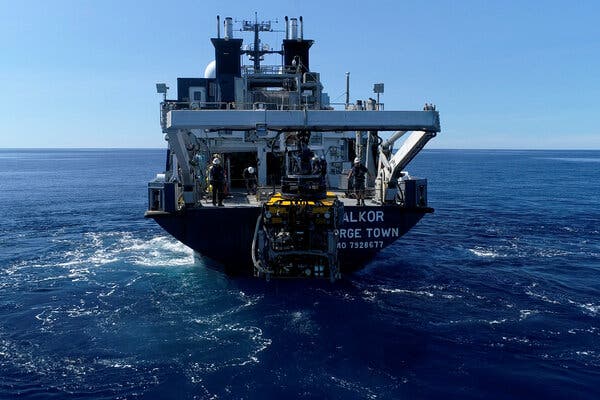 The remotely operated vehicle SuBastian being deployed in waters off Australia’s north coast by the Research Vessel Falkor.Credit...Schmidt Ocean Institute

When Dr. Vecchione got a good look at the image, he knew exactly what it was: Spirula spirula, or the ram’s horn squid. Spirula is the only living squid to have an internal coiled shell, which it tucks under the fleshy flaps of its rear end, according to Jay C. Hunt, a biologist at East Stroudsburg University. The squid can also emit lime-green light from a large photophore, also located on its behind.

Dr. Vecchione and other experts were astonished. For ages, biologists and beachgoers had stumbled upon the thumbnail-white shells of Spirula stranded on shores around the world. But no one had ever seen the animal alive in its natural habitat.

“It’s been this mystery animal,” said Rebecca Helm, a biologist at the University of North Carolina, Asheville, who was one of the excited scientists tweeting about Spirula. “It’s like the pixie-size version of the giant squid.”

Chong Chen, a biologist at Jamstec, said, “This may indeed be the first time a live animal has been caught on camera in its natural habitat.”

Although the Spirula sighting may be a scientific first, it did not make a strong initial impression on the researchers onboard. “We’ve seen bobtail squids and dumbo octopuses where we say, ‘Wow, this is the cutest thing,’” Ms. Cornet said. “This one was weird-looking, and looking at us with its weird eye.”

Perhaps even more surprising than the creature’s cameo was its strange positioning. Scientists had always assumed that Spirula swam with its head pointed down and its gas-filled bottom in the air. When Dr. Vecchione caught living Spirulas in trawl nets and plopped them in cold water onboard, the “sort of alive” squids always floated rump-up, he said.

This hypothesis made sense; the squid’s gas-chambered shell buoyed it like a nautilus, after all. But it raised another question. Deeper-living creatures often point their photophores downward, disguising their silhouettes from predators lurking below. Beaming a green light toward the sky, on the other hand, serves no clear purpose. “This is neither common nor does it make sense,” Dr. Vecchione said.

The shell of a ram’s horn squid.Credit...Chong Chen

But the Spirula caught on camera was clearly head-up, suggesting that its downward-gazing photophore was most likely used for counterillumination after all. “This makes sense,” Dr. Vecchione said.

Although the photophore mystery may now be solved, a right-side-up Spirula would seem to have a balancing problem, with the squid’s body mass precariously balanced on its buoyant shell. “When you design an R.O.V. you don’t put the heavy stuff on top and the floats on the bottom,” Dr. Lindsay said.

The video may provide clarity. Analyzing the wave patterns of the fins could shed light on how the squid manages to hang motionless in the water, Dr. Hunt said. “Normally, we’d be able to see the squid breathing through its funnel, but not in this case,” he said. “This suggests that being perfectly still is the primary defense of this little guy.”

All signs point to the fact that Spirula, or at least this particular Spirula, is rather shy. Unlike more freewheeling cephalopods, the squid held its arms together in a cone. This posture allowed the squid to pull its head inside its mantle and seal it off, like a turtle, Dr. Vecchione said. He speculated that this could protect the squid from small predators like amphipods that will “chew anything they can get ahold of.”

Near the end of the video, the Spirula puffs up its mantle with water to make a final escape into the depths — remarkably quickly, too, for a creature shaped like a long potato. Dr. Hunt was surprised by how fast the animal could jet, considering that a gas-filled shell may not respond well to quick pressure changes.

But Spirula’s speed did not faze Dr. Vecchione. “It is a squid, after all,” he said. “It is capable of doing squiddish kind of things.”

4 shopping editors share the winter coats they’ve owned for years: "It keeps the cold OUT!"