Up until March 2020, Trevor Noah had spent nearly every night of the last 15 years in front of an audience. He hosted educational shows, game shows, awards shows, reality shows in his native South Africa. He toured relentlessly as a stand-up comedian before succeeding Jon Stewart as the host of “The Daily Show” six years ago — and then still toured nonstop on the three days of the week he wasn’t in front of the camera. I tell him that in the Before Times, no matter where I found myself — on the road to Vegas, back East reporting a story, up north visiting friends — I’d inevitably run across a billboard bearing his smiling face, promoting an upcoming show at some venue.

“That’s hilarious,” Noah says, chuckling. “And I don’t doubt it for a minute.” We’re speaking via Zoom, and Noah’s in a corner of his west Manhattan apartment, his image resembling the way I’ve seen him for the last 16 months since “The Daily Show” became “The Daily Social Distancing Show” and he began broadcasting from a nook in that apartment. Only as it’s 95 degrees in New York today, he’s wearing a white T-shirt instead of what has been his signature quarantine attire, a hoodie.

When the pandemic hit last year, forcing Noah physically homeward and mentally inward, “The Daily Show” producers asked if he’d like someone to come to his apartment and build a set. Noah declined, and it wasn’t a difficult decision. If he was going to be required to stay home, he didn’t want to forget the gravity of the situation. So Noah simply set up a couple of iPhones in the corner of a bedroom where he has a couple of bookshelves (those are World Cup trophy souvenirs you see in the background) and a TV screen that’s hooked up to an Xbox and PlayStation. 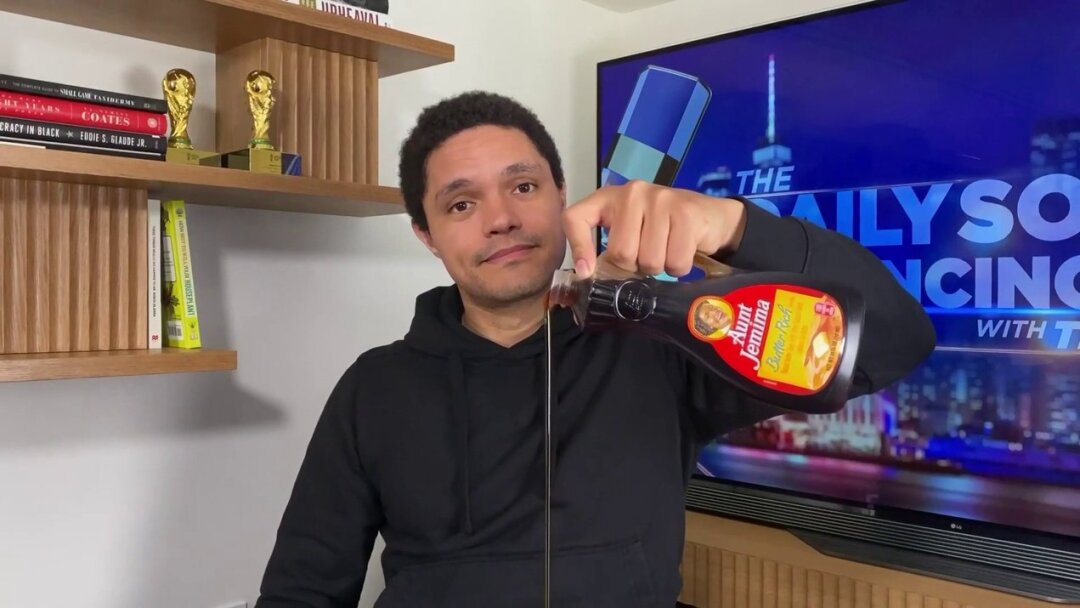 Trevor Noah, host of “The Daily Show” on Comedy Central.

Over the years, Noah, 37, has used daily routines and goals to help him deal with anxiety and depression. The isolation of the pandemic erased those grooves. Monday became Friday. Wednesday became Sunday. Noah couldn’t remember the day of the week, much less the date on the calendar. Noticing the slowly changing seasons outside his window provided his only real bearing. Playing “Call of Duty: Warzone” with crews of friends jumping out of virtual airplanes and shooting each other became a new routine, feeling more normal than the actual surreal empty streets of New York.

“Oh, I mean, it was terrible. Are you kidding me?” Noah says. “If anyone struggles with depression, if anyone’s working through anxiety, you can do a good job of managing that. You can manage how you eat, you can manage how you exercise, how you get fresh air, how you associate with people. All of these things contribute to your mental health. Having it all stripped away at once took a toll on society that I don’t even think we’ve begun to understand.”

Bank on Noah though to lead the conversation toward awareness on that subject, just as he has done on “The Daily Show” through the last 16 months, talking about the weight of the pandemic, the viral videos of police killing Black Americans, the turbulence and turmoil of the presidential election, the Capitol insurrection and, dear Lord, every other aspect of the tumultuous time we’ve lived — and continue to live — through.

“Let’s move on from some bad news ... to more bad news,” Noah said during a transition in an early September episode that opened with the apocalyptic orange-hued skies of the California wildfires. He could have used the line pretty much any time during the last year. But somehow, Noah’s calm voice — and playful humor — helped make the rolling nightmares a little less scary. Staying home in forced isolation during the pandemic was not a good fit for Trevor Noah.

“2020 wasn’t an awakening for Trevor,” says “Daily Show” correspondent Roy Wood Jr. “A lot of shows had to make tonal shifts because of the time we were in. The only thing we shifted was the type of cameras we use.”

“The Daily Show” was the first late-night show to broadcast from home when the pandemic began, and it may be the last to go back to the studio as restrictions ease. That return is inevitable, as is Noah’s resumption of his stand-up dates. Things are returning to normal, whatever that is.

A few weeks ago, Dave Chappelle popped into New York for a handful of surprise shows and called Noah, inviting him to come to one. Noah rode his bike down to the Stand NYC comedy club near Union Square, just planning to watch. But he wound up on stage, and it was exhilarating and new, both for him and the audience. Everyone was out of practice doing this whole communal thing.

“I remember saying to the audience, ‘You know I didn’t prepare because I rode a bicycle to the show,’” Noah says. “‘You don’t ride a bicycle to something that might end in your failure, because then you have to ride home on a bicycle, and that’s not exactly how you want to revel in your defeat.’” 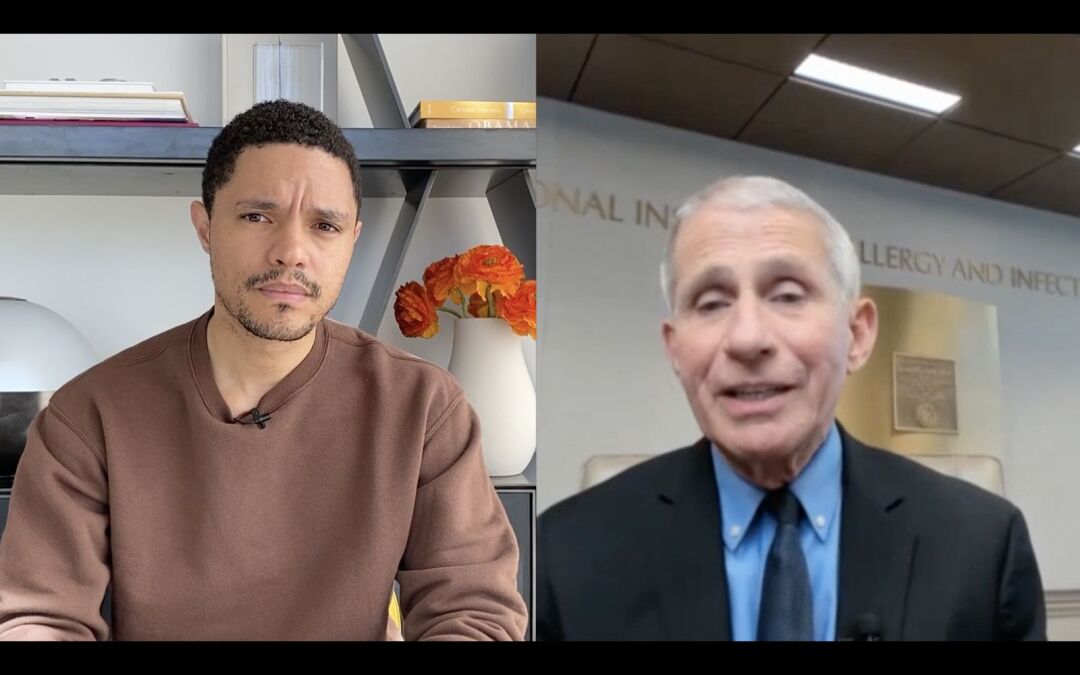 This is a perfect Noah joke, because first, it’s funny, and, second, it’s analytical. Ask Noah a question and he will attack it from every angle. “Daily Show” showrunner Jen Flanz says his “mind is always going,” and, indeed, Noah occasionally ends his thoughts with the term “et cetera,” repeating it four, five, six times, basically acknowledging that A) he realizes he has probably already thoroughly addressed the topic at hand and B) he could still keep going because, in fact, there’s a lot more to say.

What’s occupying Noah’s thoughts as the country reopens is how all that quiet time that was imposed upon him during the last 16 months may have changed him. He knows he is different. How could he not be? Flanz says she and Noah have talked about whether, once life returns to normal (knock on wood), people will fall back into familiar patterns or maybe fight to reclaim their routines or perhaps find themselves seeing things through a different lens. Noah believes he will move forward, actively asking: “Is this what I want to be a part of my life? Is that what I want to be part of my life?” And it might not be a yes or no answer. It might be a yes, but just a small part, a fraction of what it was before.

“Those are the things that I’ve fallen into the trap of taking for granted, because you felt like those things were always promised and always going to happen, and I felt like a career was something that had to be now and had to be all the time,” Noah says. “Yet, ironically, who would have thought: A pandemic would hit the world, the world would shut down and the one thing that wouldn’t stop would be work.” Trevor Noah says he’d like to slow down his workload and make more time for his personal life. But can he?

Noah laughs. Because it’s kind of funny, as bitter truths sometimes are. Flanz thinks Noah will find it challenging to regulate his love for performing and not revert to the habit of nonstop performing. Noah wonders about this too, knowing how much he misses audiences and how he feels that there’s a part of his brain that’s been dormant for the past year and a half. “I can actually feel it,” he says. “I can feel neurons in my brain that haven’t fired.”

Can he find a balance between the euphoria he gets from sharing feelings and ideas with groups of total strangers and the small pleasures found in down time spent with family and friends? Probably? Maybe? Noah searches his restless mind and doesn’t have a definitive answer. And he’s truthful enough to admit that he doesn’t know, an attitude that has made him an effective voice during this time of uncertainty. We can’t say for certain how the last year has transformed us. It’s too soon. But we can talk about it, explore it, attempt to understand it, learn from it, et cetera, et cetera, et cetera, et cetera.