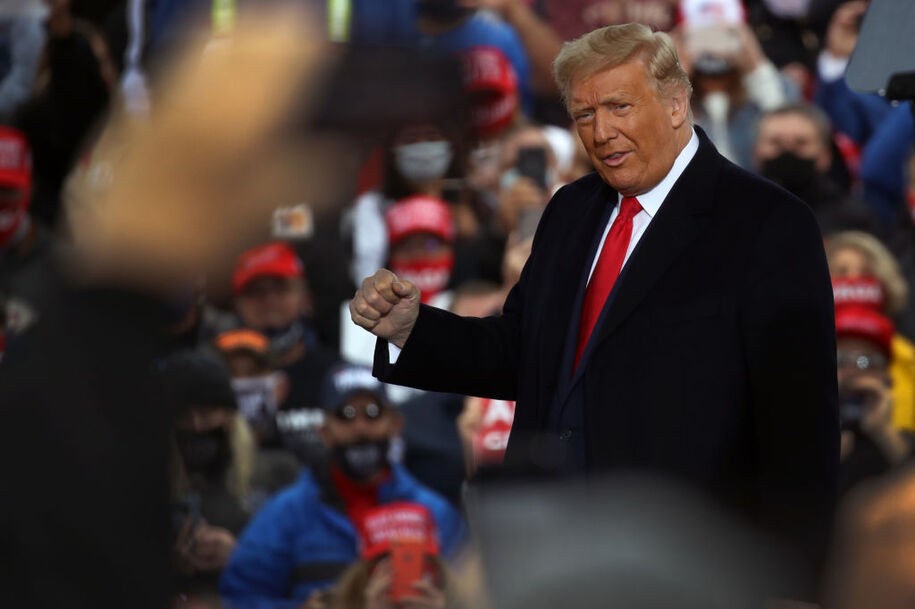 Donald Trump, leader of the so-called pro-life party, is on a death tour, packing in as many of his now infamous superspreader rallies as possible between now and Election Day.&nbsp;

For Trump and his party to survive, Republicans will have to knock it out of the park on a single day of voting on Tuesday. Democrats have racked up sizable early vote margins according to&nbsp;party identifications of registered voters—an imperfect measure but still some indication of where things stand. On Thursday, Reuters reported that&nbsp;in the 20 states that report party registration data, 18.2 million registered Democrats have voted compared to 11.5 million Republicans and 8.8 million with no party affiliation. The data doesn't tell us exactly who voted for whom, and it's not uniform&nbsp;across states. But it does suggest, to some extent, that Republican fortunes will come down to Tuesday.&nbsp;

For America to survive, however, enough voters are going to have to opt out of Trump's death parade. Trump, who not only failed to bring the pandemic&nbsp;under control but never even tried, is learning to kill his people with the efficiency of a long line of murderous dictators. If we think some 230,000 COVID-related American deaths is a tragedy—and it most certainly is—that's a drop in the bucket compared to what&nbsp;Trump has planned for&nbsp;us given the chance at another four years.

As we clearly know now based on&nbsp;Trump's actions and the overt declarations from his chief of staff Mark Meadows, the Trump administration has no plans to "control the pandemic," but rather just treat people after they fall ill. As many medical professionals have pointed out, this&nbsp;so-called "herd immunity" strategy Trump and his minions are pushing will lead to millions of deaths—more than 5 million by some estimates. That's not simply incompetence or malpractice, it's mass murder.

Those are the kind of numbers dictatorships are built on. Look up almost any of the 20th Century's most notable tyrants and they have one thing in common—they killed millions upon millions of their own people. Adolf Hitler, Joseph Stalin, Mao Zedong—all murdered brutally and without an ounce of compunction.

Trump is right on course to join them if we let him. He may not have manufactured the virus, but he has most certainly maximized its lethality. And what is becoming more apparent&nbsp;by the day is the fact that the virus' extensive footprint in the U.S. isn't simply a function of Trump's incompetence or lack of caring—rather it’s a byproduct of the glee he is taking&nbsp;in fueling its path of destruction. &nbsp;

In fact, as Trump flits around from hotspot to hotspot in the Midwest, he's the happiest of warriors. The notion that thousands of people flood into his ghoulish&nbsp;rallies and put their bodies on the line for Trump is clearly thrilling to him. It's his imaginary 5th Avenue murder on steroids—not only could he hypothetically shoot someone and not lose any supporters, he can point the gun directly at them,&nbsp;play Russian Roulette with their lives, in real life, and still not lose any voters.&nbsp;

"Is there any place you would rather be than a Trump rally on about a 10-degree evening? 10 degrees," Trump asked rally goers in Omaha, Nebraska, Tuesday. "Yeah, it's cold out here, but that's okay."

Trump ultimately climbed into the warmth of Marine One that night and airlifted out of the tundra only to leave some 25,000 of his revelers stranded and freezing. A number of people were treated for hypothermia and more than half a dozen were hospitalized—never mind the fact that we're in the middle of a pandemic.

Still Trump’s cultists&nbsp;just keep on filing into those rallies, and he adores it. While he doesn't actually adore them, he adores the attention, he feeds off it. And he shows neither&nbsp;remorse nor a hint of interest in the fact that he leaves a trail of coronavirus infections everywhere he goes. USA Today released a study on the pattern last week, and this week CNN's Sanjay Gupta&nbsp;examined 17 locations that hosted Trump rallies and 82% of the time he found infections spiked in the corresponding counties shortly after the events.&nbsp;

But Trump's not going to let a few infections get him down—heck, he doesn't even care about the dead. The only thing Trump ever grows wistful about on the campaign trail is the prospect of losing the race. There's nothing Trump despises more than a loser.

“Could you imagine if I lose? Trump pondered in front of his acolytes&nbsp;in Macon, Ga. “I’m going to say I lost to the worst candidate in the history of politics. I’m not going to feel so good. Maybe I’ll have to leave the country."

If only. Instead, Trump's death tour continues. In his last hurrah on the stump, he plans to&nbsp;sweep through several regions of the country&nbsp;already confronting serious surges in coronavirus infections, including three stops in Michigan, one stop in Wisconsin, and a stop in Dubuque, Iowa. On Friday, the top three stories in&nbsp;Dubuque’s&nbsp;daily newspaper&nbsp;featured alongside Trump's impending visit were all COVID-related.&nbsp;

In other words, when Trump holds his superspreader rally in Dubuque on Sunday, he'll be parachuting into a hot zone already aflame with the virus. Only a candidate who actually reveled in destruction would purposely plan an infectious event there.

It remains to be seen&nbsp;how well Trump's recklessness&nbsp;plays for him politically on Tuesday. But in the meantime, Trump is having a good old time&nbsp;watching people risk life and limb for him. What a thrill.

Mbappe scored his 100th goal for PSG and shares 4th place in the club's goalscoring list
As a child, Monday played with stockings with straw or cans of stew. And he told my mother that he goes to tennis
Negredo scored for Barcelona after a mistake by Langle. Clement could not take the ball after an out, Ter Stegen did not have time to knock out
Kick It Out about whistling to players who took a knee in the championship: Applaud for ignoring hate speech
Flick about 3:3 with Leipzig: Crazy game. It is important that Bayern did not lose
Dybala has not scored any points in this season's Serie A, he has played 6 matches
Giroud has 6 goals in his last 4 games. He has scored in his last 6 games in Chelsea's Premier League start
Source https://www.dailykos.com/stories/2020/10/31/1991194/-Trump-isn-t-just-spreading-the-virus-he-s-reveling-in-fueling-its-destruction

Emoji Kitchen: the new function to 'create' up to 14,000 different emojis

A federal court just reinstated DACA, and the implications go far beyond immigration