In just nine days, the U.S. has expelled nearly 4,000 Haitian migrants, including hundreds of families with children, without allowing them to seek asylum as part of an ongoing deportation blitz to a country ravaged by natural and man-made calamities.

The Biden administration has carried out the mass expulsions under an emergency pandemic-era policy known as Title 42 that was first enacted under former President Donald Trump, to the dismay of advocates for asylum-seekers and Democrats.

The pace and scale of the expulsions to Haiti, a country where deportation flights were suspended last month because of a deadly earthquake, could make the operation one of the swiftest and largest U.S. deportation campaigns of migrants by air.

Between September 19 and September 27, 37 U.S. expulsion flights landed in Haiti with 3,936 migrants on board, including 2,300 parents and children who entered U.S. border custody as families, according to Department of Homeland Security data.

"Many, if not all" of those expelled in Haiti previously lived in Chile, Brazil and other South American nations and have not been in their homeland for years, exacerbating the disruption caused by the U.S. expulsions, said Giuseppe Loprete, the chief of mission for the Port-au-Prince-based chapter of the International Organization for Migration (IOM).

About 44% of the deportees Haiti has received since September 19 are women and children, according to IOM. More than 210 of the deportees are children born in Chile, Brazil, Venezuela and Panama who were expelled with their Haitian-born parents, Loprete said.

Loprete, whose organization has been assisting deportees at the Port-au-Prince and Cap-Haitien airports, said he has seen Haitian migrants expelled by the U.S. visibly frustrated and distraught after deplaning. 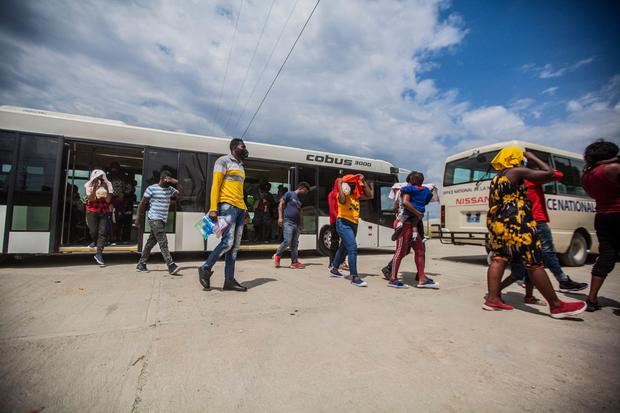 Expelled migrants arrive on September 19, 2021 at the airport in Port-au-Prince. RICHARD PIERRIN/AFP via Getty Images

At the two airports, IOM has been distributing meals, hygiene kits, feminine products and a per-person stipend equivalent to $100 that deportees can use to pay for food, clothes, transportation, phone calls and other necessities, Loprete said. The organization also has one mental health counselor on-site.

The deportees are tested for the coronavirus by Haiti's public health ministry at the airports, where Red Cross units have also been deployed. After their processing is completed, they are taken to a bus station, Loprete said. The deportees are then responsible for reaching their respective destinations in Haiti.

The U.S. Agency for International Development said it is providing $5.5 million to IOM so it can serve deported Haitians. Despite the financial support from the U.S., some experts and officials, including a top American diplomat to Haiti who resigned this month over the expulsions, have questioned whether Haiti can adequately absorb thousands of deportees.

Haiti, the poorest country in the Western Hemisphere, continues to be beset by rampant insecurity, gang violence and political turmoil that was exacerbated by the July assassination of its president.

"I don't think Haiti can really absorb thousands of homeless people, many of whom don't have family or support networks in the country, in this short amount of time," Adam Isacon, an analyst for the Washington Office on Latin America who monitors migration issues, told CBS News. "It's probably going to work to the advantage of gangs and extortionists who pretty much run vast parts of Port-au-Prince. These people are going to be exploited."

The Biden administration's treatment of Haitian migrants encountered along the southern border has garnered an intense and rare flurry of bipartisan criticism.

U.S. officials last week cleared a massive camp that became the chaotic symbol of the rapid arrival of 30,000 migrants, many of them from Haiti, in Del Rio, Texas. But the issue has remained in the national spotlight, with Republicans blasting the administration for not expelling all the migrants and Democrats outraged that the expulsions are taking place in the first place.

Roughly 13,000 of the migrants recently encountered in Del Rio were processed under U.S. immigration laws and allowed to have a hearing before a judge, including 3,000 who were sent to detention centers, according to DHS data. An estimated 8,000 returned to Mexico voluntarily, while another 4,000 remain in U.S. custody awaiting expulsion or release.

Citing the dire conditions in Haiti, top Democratic lawmakers like Senate Majority Leader Chuck Schumer have urged the administration to stop the expulsion policy, which they have called a relic of President Trump's "inhumane" immigration agenda.

In July, when it granted Temporary Protected Status, a humanitarian form of deportation relief, to certain Haitians already in the U.S., the Biden administration recognized that Haiti was "grappling with a deteriorating political crisis, violence, and a staggering increase in human rights abuses."

Asked how that decision squared with the recent assessment that deportations to Haiti could continue, DHS Secretary Mayorkas said on Monday that the August earthquake was "geographically" limited.

"Working with Haiti, we felt it possible to return people to Haiti," Mayorkas said during the annual Immigration Law and Policy conference, conceding that the assessment has not "achieved unanimity of opinion."

The Biden administration has been using the Title 42 public health authority to expel Haitians, DHS officials told reporters last week, noting that some vulnerable migrants, like pregnant women, could be exempted from the policy on a case-by-case basis.

The use of this Trump-era policy, however, is currently in legal jeopardy. The U.S. will be barred from processing migrant families with children under Title 42 starting Friday unless a federal judge's order from earlier this month is paused by an appeals court.

On Monday, Mayorkas said the Biden administration would not "embrace" the Title 42 expulsions if they were part of an "immigration policy." He called the measure necessary to prevent the spread of the coronavirus in migrant holding facilities, citing "a rate of illness of approximately 20%" among migrants.

In a court filing Monday defending the continued enforcement of Title 42, Justice Department lawyers called the expulsion policy "a significant deterrent to the entry of family units."

"That the Title 42 expulsion policy is actually about immigration politics, and not about public health, is clear from the number of medical experts who have lined up to condemn it in the strongest possible terms," Lee Gelernt, the top ACLU attorney challenging the expulsions, told CBS News.

Camilo Montoya-Galvez is the immigration reporter at CBS News. Based in Washington, he covers immigration policy and politics.