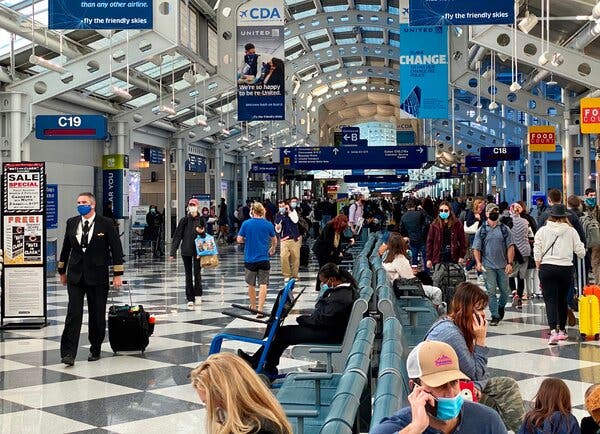 All record-breaking numbers for those states — and all on a day when the United States as a nation reached two grim new highs. On Thursday, the U.S. recorded more than 90,000 new cases (that’s the equivalent of more than one per second) and crossed the threshold of nine million cases since the start of the pandemic.

Over the past week, new cases in the United States have averaged more than 77,000 a day, and nine states reported daily records on Thursday. More total cases have been identified in the U.S. than in any other country, though some nations have had more cases in proportion to their populations.

“There is no way to sugarcoat it: We are facing an urgent crisis, and there is an imminent risk to you, your family members, your friends, your neighbors,” said Gov. Tony Evers of Wisconsin.

Wisconsin has been badly hit. More than 200 coronavirus deaths have been announced over the past week, and as case numbers have exploded, hospitals have been under increasing strain.

But it is hardly alone.

The surge that started in the Upper Midwest and rural West has now spread far beyond, sending infection levels soaring in places as disparate as El Paso, Chicago and Rexburg, Idaho.

In the seven-day period ending Thursday, 24 states added more cases than in any other seven-day stretch of the pandemic.

All this is taking place against a backdrop of a bitter presidential contest in which the pandemic — and the government’s response to it — is the dominant issue.

Daily reports of deaths from the virus remain far below their spring peaks, averaging around 800 a day, but those, too, have started to tick upward.

There are not many hopeful signs in the recent data.

Reports of new cases are increasing in 42 states. Northeastern states, including New Jersey and Rhode Island, are seeing infection numbers rise after months of stability. And in North Dakota, where more than 5 percent of the population has now tested positive — the biggest share of any state — reports of new cases continue to soar. 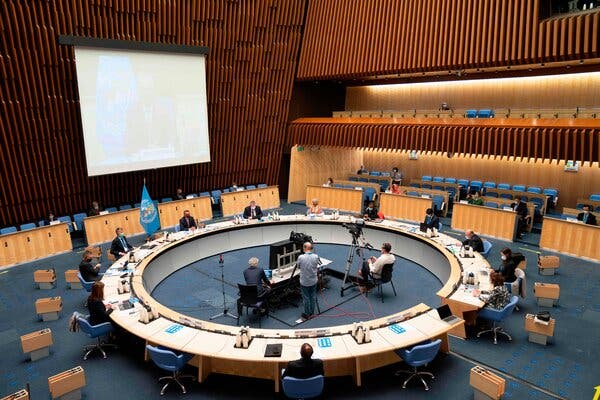 Quitting the World Health Organization, as President Trump has pledged to do, could potentially be “ruinous” for the United States in the event of a future pandemic, public health experts say.

Speaking at a forum on the planned U.S. withdrawal, they noted that the W.H.O. plays a critical role as the clearinghouse for advance warnings of disease outbreaks anywhere in the world.

“We’re only one plane flight away from something very bad being transmitted from one country to another,” said Dr. Georges C. Benjamin, executive director of the American Public Health Association. Dr. Benjamin spoke at a webinar Thursday on the U.S. withdrawal plan that was sponsored by Physicians for Human Rights.

Instead of pulling the United States out of the organization, the experts argued, whoever takes over in the White House in January should work with other nations to give the W.H.O. greater legal powers to demand that member states divulge everything they know about their outbreaks so that other countries can prepare if they spread.

Mr. Trump has blamed China and the W.H.O. for the spread of Covid-19 in the United States. Most public health experts instead blame him because he played down the disease, and failed to mount a robust federal response.

Because Congress approved the American entry into the W.H.O. in 1948, it may not be possible to withdraw without Congress’ approval, said Lawrence O. Gostin, chair of the O’Neill Institute for National and Global Health Law at Georgetown Law School.

In any case, the United States cannot leave the agency until next July, because American law requires that the administration give one year’s notice and pay all back dues owed. 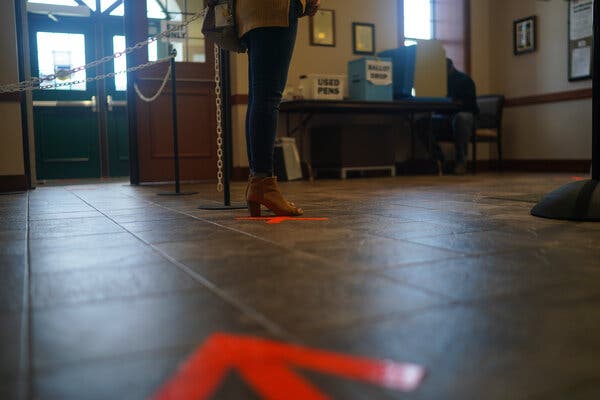 A woman waited at a marked spot as others voted at Little Chute Village Hall in Wisconsin, on Thursday.Credit...Chang W. Lee/The New York Times

Voters in several swing states are casting their ballots at the same time the coronavirus reaches new peaks in their communities, creating more uncertainty about how they will vote — and for whom.

The pandemic has killed about 230,000 people in the United States and upended the nation’s economy. Now it could help decide the presidential election.

Some electoral battlegrounds, like Michigan and North Carolina, are seeing record numbers of new cases and deaths. Hospitals in Wisconsin and other hard-hit areas are reaching capacity, pushing health care providers to the brink and leaving their workers reeling. Other swing states, like Pennsylvania, Florida and Arizona, are experiencing more mild upswings.

“Things are really running rampant, so there is a lot of discontent,” said Barry Burden, director of the Elections Research Center at the University of Wisconsin-Madison.

Wisconsin narrowly voted for President Trump in 2016, but the virus may change the outlook for him there.

“I do think it provides more of a challenge for Trump to try and win the state because any news about the pandemic — it’s not good for him,” Dr. Burden said.

Already, the pandemic has complicated the voting process.

Because of concerns the virus would hamper people’s ability to vote, several states have encouraged mail-in voting. About 1.64 million people had returned absentee ballots in Wisconsin as of Thursday, more than half of the total ballots cast in 2016.

How voter fears of getting infected at polling places might play out is anyone’s guess.

While those concerns could keep some rural and suburban Republican voters away from the polls in Wisconsin on Tuesday, it might prove equally discouraging to Democratic voters in Milwaukee, said Dennis Dresang, an emeritus professor of political science and public affairs at the University of Wisconsin-Madison.

“It’s hard to know what the net effect is going to be,” he said.

In other battleground states like North Carolina, Florida and — this year — Texas, the president could see fading support from Republicans who feel frustrated by what they see as a lackluster federal response to the coronavirus. Those states may also see higher turnout among Democrats who opted to vote by mail for former Vice President Joseph R. Biden Jr.

“Enthusiasm for turning out for Trump among Trump supporters will wane somewhat, and so it will affect turnout somewhat,” said John Aldrich, a professor of political science at Duke University. “I don’t think it’s going to be a massive thing.”

Still, he said, in places where elections can come down to a few thousand votes, “everything matters.”

Administering remdesivir to a patient in Texas this summer.Credit...Christopher Lee for The New York Times

The United States reached a milestone, of sorts, when last week the Food and Drug Administration approved the first treatment for Covid-19: Veklury, better known by its scientific name, remdesivir.

But the F.D.A.’s decision to grant the drug full approval — which means its manufacturer, Gilead Sciences, can begin marketing it broadly to doctors and patients — has puzzled several outside experts. They say that it may not deserve the agency’s stamp of approval because it is, at best, a mediocre treatment for the disease caused by the coronavirus.

One large, government-run trial found that the drug shortens patients’ recovery times, but the two other studies the F.D.A. used to justify its approval — sponsored by Gilead — did not compare the treatments with a placebo, the gold standard for evaluating a drug. No studies have shown that it significantly lowers death rates. And a large study sponsored by the World Health Organization found that remdesivir provided no benefit to hospitalized patients.

Experts have also questioned whether Gilead deserves to pocket potential billions from the drug when the government has played a significant role in its development. On Wednesday, the company said that remdesivir, which has been authorized for emergency use since the spring, had brought in $873 million in revenue so far this year.

“The F.D.A. doesn’t exist to give monetary prizes to drug companies,” said Dr. Peter B. Bach, the director of the Center for Health Policy and Outcomes at Memorial Sloan Kettering Cancer Center. “The F.D.A. exists to help inform doctors as to what drugs they should give patients in front of them today.”

Rooney on the possibility of a move to Barca in the 2010/11 season: Thinking about it. Could fit in perfectly
Hooray, in England they will let the audience into the stands again! While up to 4 thousand and not everywhere, but the clubs are happy 😊
Solskjaer about the match with Istanbul: these are the Champions of Turkey, it will be difficult
Gasperini on the nomination for the best coach of the year award: If we beat Liverpool, maybe I'll get a few votes
Julian Nagelsmann: Leipzig want to give PSG that final feeling they are talking about
Tuchel Pro Champions League: Match with Leipzig - the final of our group
Antoine Griezmann: it's Time to put everything in its place. I've had enough
Source https://www.nytimes.com/live/2020/10/30/world/covid-19-coronavirus-updates

Why I’m Mourning the Death of a Giant Telescope

The Queen's Gambit Just Set a Wild Netflix Record--and Yes, It's Absolutely Worth the Hype

If You Left A Monolith In A Remote Utah Canyon, Authorities Would Like A Word

At least 45 people have been killed during Uganda protests

This Is What Life Will Be Like for the First People to Settle on Mars, According to Elon Musk

Below Deck Med's Hannah Ferrier Is Engaged: See Her Ring

A Meditation on Manhattan in the Work of Torey Thornton

Why Throwing Out the "Old Bananas" is Imperative to Your Success

Doctors and Nurses Talk About Burnout as Another Wave of COVID-19 Hits U.S.

How Online Tools Can Help Your Nonprofit Survive COVID-19

Shawn Mendes' In Wonder Bombshells: His First Meeting With Camila Cabello and More