Get all the latest news on coronavirus and more delivered daily to your inbox.  Sign up here.

Historian and Hoover Institution senior fellow Victor Davis Hanson told "The Daily Briefing" Wednesday that Obama national security adviser Susan Rice was likely tired of being a "scapegoat" for the administration and was hoping to cover her tracks by writing the newly declassified email she sent to herself on Inauguration Day, 2017.

"During the Benghazi mess, she went out on the directive of Obama on five occasions and lied about the origins, genesis, and the cause of the disaster," Hanson told host Dana Perino. "She was not going to be a scapegoat again."

Hanson said Rice "played that role again and again ... whenever there was a lie in the administration, it was traced back to her.

"And I think that she was kind of apprehensive," he added, suggesting Rice's thought process was "'I'm not going to do this anymore. And I need a document that shows that I was just following Obama's orders, but he was only following what other people told him.'"

Rice's email documented a Jan. 5 Oval Office meeting with Obama and others, during which he provided guidance on how law enforcement should address Russian interference in the 2016 presidential race. Parts of the email had been previously released, but a section stating that then-FBI Director James Comey had suggested that the National Security Council (NSC) might not want to pass “sensitive information related to Russia” to Rice's designated sucessor, Michael Flynn, had been classified as "TOP SECRET" until Tuesday. 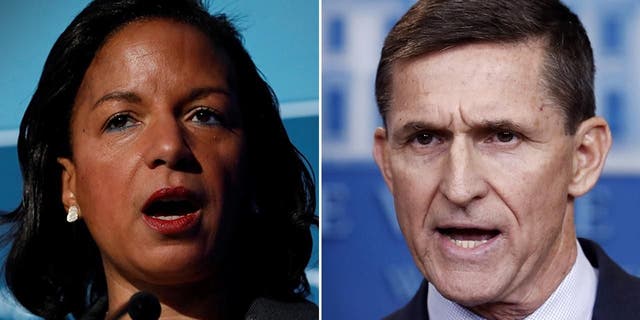 Rice wrote that Obama wanted to be sure that his outgoing administration was "mindful to ascertain if there is any reason that [they could not] share information fully as it relates to Russia.”

Comey reportedly reassured Obama and promised he was proceeding "by the book," -- a term Rice emphasized three times throughout the email -- and said that he had "no indication thus far that Flynn [had] passed classified information to [Russian Ambassador Sergey Kislyak]."

Hanson questioned Rice's emphasis on operating "by the book," which he said might indicate that Obama "ordered her or suggested that people might not want to be candid" in sharing information with Flynn pertaining to Russia.

Rice "was very worried that James Comey or Barack Obama or the mixture of the two might suggest that it happened in the past...," Hansen explained, "and that she would be culpable."

"So," he went further, "if she ever got in trouble and lied about all of this to Flynn and others, she could say, 'I went to a meeting and the president of the United States on the advice of James Comey said that there were some problems ... and we might not be able to be candid about what we knew about Russia and this new administration.'"

The Premier League has changed its approach to determining offside after Man City's Aston Villa goal. Now in this situation will be fixed out of the game
Zlatan and Lukaku had a conflict in the Italian Cup match
Zlatan scored 8 goals for Inter Milan. More than any other team
Alli is not training with Tottenham due to negotiations with PSG. He does not want to let Levi go
Batshuayi scored in the Premier League for the first time since October 2019
Valdarno about leaving the Youngster rent in the Arsenal and Real Madrid Player should not be so quick to give up. He did not have enough patience
Ighalo has announced his departure from Manchester United
Source https://www.foxnews.com/media/victor-davis-hanson-susan-rice-email-obama?utm_source=feedburner&utm_medium=feed&utm_campaign=Feed%3A+foxnews%2Fmost-popular+%28Internal+-+Most+Popular+Content%29

Denial of responsibility! The World News is an automatic aggregator of the all world's media. In each material the author and a hyperlink to the primary source are specified. All trademarks belong to their rightful owners, all materials to their authors. If you are the owner of the content and do not want us to publish your materials, please contact us by email [email protected]ews.net. The content will be deleted within 24 hours.

These Business Owners Made Their Feelings for Trump Clear, and So Did Their Customers

Severe Weather Sweeps Through Different Parts Of The Country

Most Republicans declare Trump's trial unconstitutional. Here's what that means for conviction.

Fox News hires Larry Kudlow; McEnany may be next

A Witness to History and Bernie Sanders in His Mittens

Olivia, Sophia and Aurora Culpo Spill About Their New Arrivals at Macy's

More misery for Bruce as Newcastle loses 2-1 to Leeds

Analysis: On immigration, Biden seeks a new approach to an old deadlock

White House aims to have "greater" vaccine availability this spring