The law also seeks to reduce the militarization of police by prohibiting law enforcement from obtaining or using specified equipment, including grenades, weaponized aircraft and high-caliber firearms. Northam amended the house bill to clarify that law enforcement agencies can seek a waiver to use restricted equipment for search-and-rescue missions.

“Too many families, in Virginia and across our nation, live in fear of being hurt or killed by police,” Northam said in a statement. “These new laws represent a tremendous step forward in rebuilding trust between law enforcement and the communities they serve. I am grateful to the legislators and advocates who have worked so hard to make this change happen. Virginia is better, more just, and more equitable with these laws on our books.” 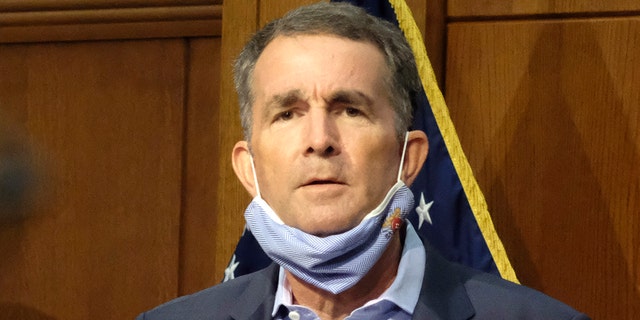 In this Sept. 1, 2020 file photo, Virginia Gov. Ralph Northam listens to a reporter's question during a press briefing inside the Patrick Henry Building in Richmond. (Bob Brown/Richmond Times-Dispatch via AP)

Statewide bans on no-knock warrants are already in effect in Florida and Oregon, while Kentucky and Pennsylvania are considering similar legislation, according to USA Today.

The state law in Virginia was signed the same day Taylor’s mother, Tamika Palmer, requested in an application to Kentucky’s Prosecutors Advisory Council that a new prosecutor consider charges against the Louisville police officers involved in the raid that killed her daughter.

Taylor was killed when three officers executed an apparent no-knock search warrant during a narcotics investigation, but prosecutors have said the officers announced themselves before entering the apartment in March. No drugs were found.

Two anonymous jurors allege Kentucky Attorney General Daniel Cameron did not supply them with all of the evidence they asked for and, therefore, did not give them the option to pursue homicide charges in connection to Taylor’s death. The jurors, in an exclusive interview that aired on "CBS This Morning" Thursday, also accused the police of “covering up” their mistakes.

Cameron has said his office did not recommend murder charges against Sgt. Jonathan Mattingly and Officer Myles Cosgrove to the grand jury because they were justified in using force since Taylor’s boyfriend, Kenneth Walker, fired at them first and struck Mattingly in the leg.

The attorney general, who took over the case in mid-May, said the charges his office could prove beyond a reasonable doubt were the three counts of wanton endangerment against Detective Brett Hankison, who was fired from the Louisville Metro Police Department in June. The charges were related to shots fired into a neighboring apartment while three residents were home, not Taylor’s death.

Other reforms enacted in Virginia Wednesday include mandating that law enforcement agencies and jails request the prior employment and disciplinary history of new hires, as well as expanding and diversifying the Criminal Justice Services Board to ensure the “perspectives of social justice leaders, people of color, and mental health providers are represented in the state’s criminal justice policymaking.”

The board will also be allowed to initiate proceedings to decertify law enforcement officers.

The reforms make it a Class 6 felony for law enforcement officers “to ‘carnally know’ someone they have arrested or detained, an inmate, parolee, probationer, pretrial defendant, or post trial offender, if the officer is in a position of authority over such individual.”

Law enforcement officers will be required by law to intervene when they witness another officer engaging or attempting to engage in the use of excessive force. Another reform limits the circumstances where officers will be allowed to use neck restraints.

Borussia Dortmund presented a collection with Spongebob as part of a deal with Nickelodeon
Woodward on Manchester United and trophies: there is a lot of work Ahead to achieve the stability needed
Neuer - best goaltender in 2020, Alisson-2nd, Oblak-3rd (ESPN)
Liverpool are Interested in 21-year-old Leipzig defender Konate
Niko Kovac: I'm Waiting for Golovin to return. But it might be better to wait another week or two
Suarez's Italian language examiners were suspended for 8 months. An investigation is underway against the Director of Juve Paratici
Zinedine Zidane: I Never felt untouchable at Real Madrid. Criticism is normal
Source https://www.foxnews.com/politics/virginia-northam-no-knock-warrants-breonna-taylor-police-reform

Opinion | Why Pell Grants Can Help Fight the Pandemic