Vote by Mail Deadline: Time to Vote is Running Out as Election Nears

WASHINGTON — With just a week to go before the election on Nov. 3, the window is rapidly closing for many people who still plan to cast an absentee ballot through the mail.

The Postal Service has reported that on-time delivery rates for first-class mail are far below its target throughout October, and a growing chorus of experts and election officials is warning voters in many parts of the country not to rely on the mail to cast their ballots, and instead to deliver ballots directly to election officials or collection points themselves.

According to a news release on Friday, during the week of Oct. 10, the most recent for which data is available, the Postal Service saw on-time first-class mail delivery dip to 85.6 percent, near a low of 83 percent it reported during the summer peak of the pandemic in July.

Normally, the agency reports on-time delivery, defined as within two days, at rates above 95 percent.

“I would not mail in a ballot in this circumstance, and I think for anybody who can, either vote in person or drop it off at a box,” said Paul F. Steidler, a senior fellow who studies Postal Service operations and policies at the Lexington Institute, a research group.

Anticipating pressure to get ballots to elections boards as fast and efficiently as possible, the Postal Service has put in place measures to sort out and expedite election-specific mail, which is often labeled and bar coded, making it easier to track and prioritize.

According to data in court filings the agency provided during a lawsuit over operational changes that caused delays in September, the Postal Service stated that on-time delivery of election mail was as high as 97.2 percent at the time, even though overall on-time delivery for first-class mail was only 84.2 percent then.

“It is being treated differently,” said Michael Plunkett, the president of the Association for Postal Commerce. “They’re doing things to identify it and isolate it in the network and devoting resources to make sure that the plants are cleared of election mail on a daily basis.”

Kristin Seaver, the Postal Service’s chief retail and delivery officer, said the agency was “taking the steps necessary to devote extra resources to advancing ballot mail to increase the speed of delivery over all other mail.”

“This will remain our No. 1 priority through the election,” she said.

But experts have warned that not all ballots flowing back and forth from local election authorities and voters across disparate parts of the country are being identified, and that a significant portion is likely still being lumped in with first-class mail.

Critics add that the lack of real-time data about where slowdowns may be worst also makes it impossible for voters to know how significantly the area they live in may be affected.

In an Oct. 20 investigative update on the agency, Senator Gary Peters, Democrat of Michigan, released information showing that mail in several major regions, including Philadelphia, Baltimore and Detroit, was delayed more than 20 percent of the time in early October, and that Michigan as a whole had seen delays.

The same day, two weeks before the election, Michigan’s top elections official encouraged voters to avoid the mail entirely and hand-deliver ballots to a collection box or a local clerk. 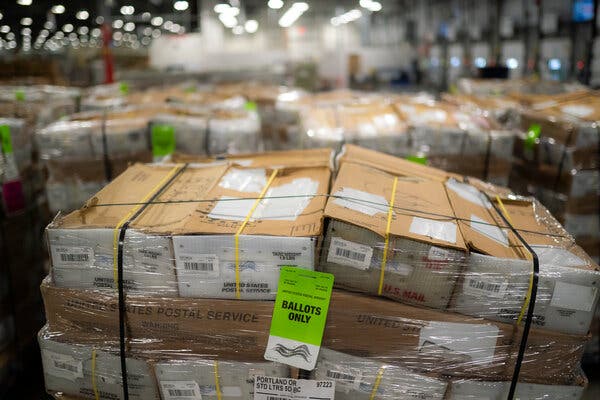 Adding to the uncertainty, deadlines for receiving ballots vary across states and have been changing amid a flood of lawsuits.

Earlier this month, a federal appeals court ruled that all mail-in ballots in Michigan must be received by Election Day, rejecting an extension that would allow late-arriving ballots to be counted. On Monday, the Supreme Court issued a similar ruling for Wisconsin, requiring that absentee ballots in the state be received by 8 p.m. Nov. 3.

In August, the Postal Service recommended that all voters mail their ballots no later than Tuesday, Oct. 27, to ensure that they arrive on time.

That first-class mail is being delayed in some parts of the country does not necessarily mean that voters who recently mailed ballots should worry about their ballots arriving on time. Throughout the pandemic, the vast majority of late mail has still arrived within three days, with only a small fraction arriving two or more days late.

“The fact that once you add one day to service levels, that nationally you’re back up and over 95 percent delivery, how bad is that of a problem?” said Mark M. Fallon, the president of the Berkshire Company, a consulting firm that advises on mail processing strategies. “However, when you have these local hot spots, and the lack of transparency, you’re creating, basically, an atmosphere where people aren’t trusting the Postal Service, and that’s the part I’m worried about.”

On Monday, experts also warned voters not to turn to private carriers like UPS or FedEx to handle ballots after a photo circulated on social media showing the singer Lady Gaga holding her ballot and a FedEx envelope. Voters who have yet to return ballots should bring them to a drop box or an election office, these experts said.

Van Dijk - best Central defender of 2020, Trent-right, Robertson-left (ESPN)
Massimiliano Allegri: Ronaldo is a top player in terms of mentality. He has a new goal every year
Borussia Dortmund presented a collection with Spongebob as part of a deal with Nickelodeon
Woodward on Manchester United and trophies: there is a lot of work Ahead to achieve the stability needed
Neuer - best goaltender in 2020, Alisson-2nd, Oblak-3rd (ESPN)
Liverpool are Interested in 21-year-old Leipzig defender Konate
Niko Kovac: I'm Waiting for Golovin to return. But it might be better to wait another week or two
Source https://www.nytimes.com/2020/10/27/us/politics/vote-by-mail-deadline.html

Responding to Terrorism in France

Cannabis got a big win in Congress, but legal weed isn't around the corner