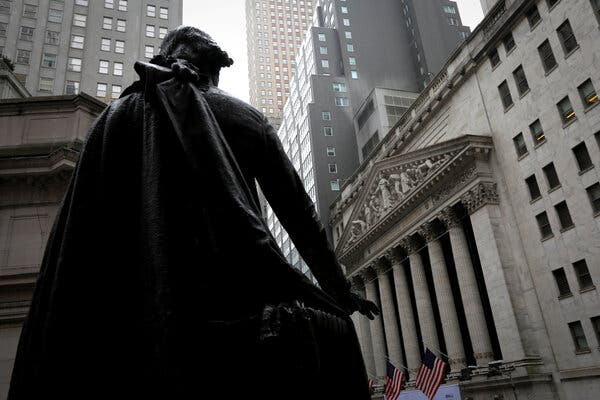 The New York Stock Exchange in Manhattan. Investors were looking ahead to a busy day of quarterly earnings.Credit...Mike Segar/Reuters 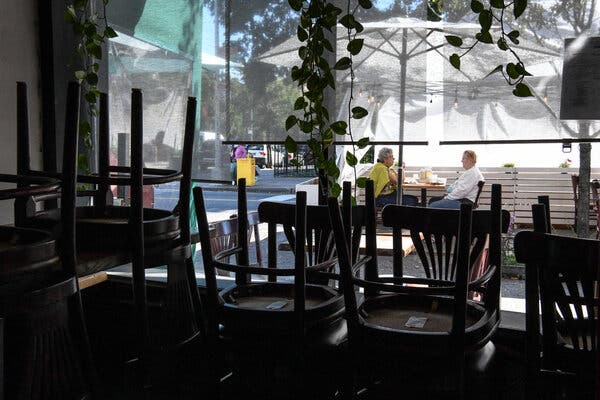 A restaurant in New York in September. Forced into lockdown mode by the pandemic and worried about their futures as the economic recession set in, people scaled back their spending. Credit...Desiree Rios for The New York Times

There’s an unlikely silver lining to the recession that set in eight months ago: Despite the economic devastation, which tipped millions of people into unemployment, many American households are in relatively good shape, The New York Times’s Stacy Cowley reports.

The pain may still be coming. Banks and other consumer lenders are bracing for financial stress next year, as millions of people remain out of work and the labor market’s rebound shows signs of stalling. But for now, households are weathering the turmoil largely because of the unusual nature of the current downturn. 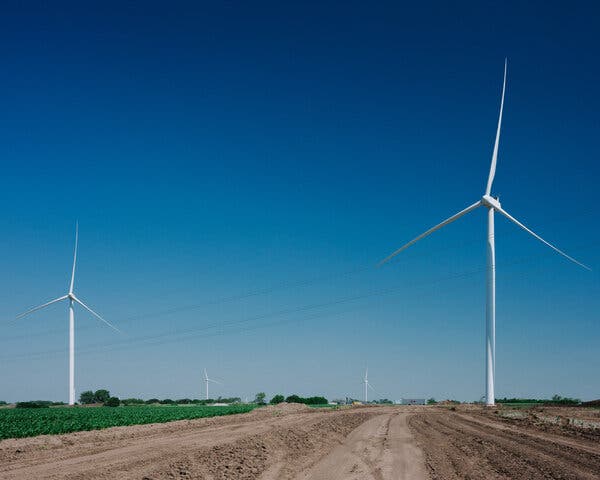 The coronavirus pandemic has delayed deliveries and disrupted construction of a wind project being built in Nebraska by EDF, a French energy company.Credit...Walker Pickering for The New York Times

Even as businesses around the world shut down this spring, executives at EDF Renewables were hopeful they would finish installing 99 wind turbines in southern Nebraska before a year-end deadline. Then, in early April, the pandemic dealt a big blow to the company.

A manager at a factory that was building the giant cylinders on which the turbines sit had died of the coronavirus, shutting down the plant. That and other setbacks — including construction workers at the site in Nebraska contracting the virus — have hampered EDF’s efforts to finish the $374 million project by the end of the year.

The American Wind Energy Association estimates that the pandemic could threaten a total of $35 billion in investment and about 35,000 jobs this year. The losses could grow if the coronavirus continues to disrupt the economy well into next year.

“Every part of the supply chain has been hit by this,” said John Hensley, the wind association’s vice president of research and analytics.

Wind turbines provide more than 7 percent of U.S. electricity and are the largest carbon-free energy source after nuclear power plants. Nebraska gets about 20 percent of its electricity from wind, and when it is complete, EDF’s project will have the capacity to meet the electricity needs of about 115,000 homes.

The wind energy business was growing about 10 percent a year before the pandemic. But industry officials now fear that projects under construction may be postponed or canceled. The industry had hoped Congress might provide aid to renewable energy, but it got little from the stimulus bills passed in the spring.

The industry did receive some help from the Treasury Department, which in May gave wind energy developers more time to complete construction in order to qualify for a federal tax credit. Businesses now have to finish projects they began in 2016 and 2017 within five years, up from four years previously.

Goodbye, Dad Buba Diop. Thanks to you, I lived the most memorable tournament of my childhood
Nuno about 2:1 with Arsenal: We played amazing, very proud. Jimenez recovered
Arsenal scored 13 points in 10 opening matches - the worst result in 39 years
West Brom can be bought by us investors. The Chinese owner of the club wants 150 million pounds
Lampard on Mourinho's words about ponies: You have Kane, Son, bale and alli. We are all fighting to win the Premier League
Mourinho on winning the Premier League: Tottenham are not in the race, because we are not a horse, but a pony
Laurent Blanc: I will return to football, but in children's. Now coaches are being asked to increase the cost of players, I don't like it
Source https://www.nytimes.com/live/2020/10/27/business/us-economy-coronavirus

Top health officials agree Americans who traveled for Thanksgiving should get tested. But this is where they differ

Clare Crawley gets candid about trying to ‘rise above the negativity’

U.K. official says "The Crown" should have "fiction" warning

Dr. Siegel says canceling Christmas would be ‘worst idea in the world’: We shouldn’t cancel ‘things that inspi

Joe Biden twists ankle while playing with his dog

Biden twists ankle while playing with his dog Major

The US was already setting Covid-19 records. Experts say Thanksgiving could have made things worse.

George Clooney's secret to cutting his hair, as seen on TV

Hundreds Detained In Belarus Protests Over The Weekend

Bidens set to bring new cat to the White House

A Season of Footnotes Limps to Its Conclusion

Mexico charges ex-security chief who faces trial in US

No. 23 Ohio State rallies past UMass-Lowell in 2nd half

Can You Guess Who This Cutie Grew Up To Be?

What Happened To The Lady Gaga Biopic?

Britain stocks up on vaccines, hopes to start virus shots in days

Trump falls short in Wisconsin recount he paid $3 million for

Hinton promoted with all 4 Denver QBs out

George Lucas, Mark Hamill and More Pay Tribute to David Prowse: ‘He Made Vader Leap Off the Page’