What’s on TV This Week: ‘This Is Us’ and ‘The Haunting’

Between network, cable and streaming, the modern television landscape is a vast one. Here are some of the shows, specials and movies coming to TV this week, Oct. 26-Nov. 1. Details and times are subject to change.

ESSENTIAL HEROES: A MOMENTO LATINO EVENT 9 p.m. on CBS. This one-hour, star-studded special aims to raise awareness and joy in the Latino community, which has been disproportionately affected by the coronavirus pandemic. Hosted by Eva Longoria, Gloria Estefan and Ricky Martin, the event will feature musical performances, comedy sketches and documentary shorts from Lin-Manuel Miranda, Pitbull, Rita Moreno and others.

HALLOWEEN BAKING CHAMPIONSHIP 9 p.m. on Food Network. After creating devilish desserts in the shape of haunted houses, demon dolls and Halloween costumes, the four remaining bakers in this competition show will face off for the championship title on the season finale. Their task? Create cakes that look like severed limbs, as well as cakes that appear to float in thin air. The judges Carla Hall, Stephanie Boswell and Zac Young will decide who will win the $25,000 prize. 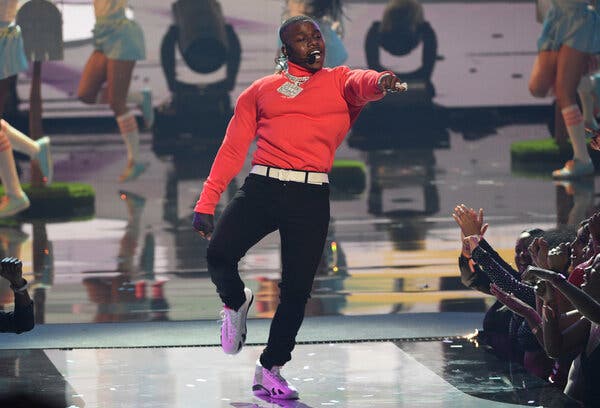 2020 BET HIP HOP AWARDS 9 p.m. on BET. Snoop Dogg, T.I. and Monica will present this year’s BET Hip Hop awards, with performances from Lil Wayne, Cordae, 2 Chainz, City Girls and Ty Dolla $ign. This year, DaBaby is up for 12 awards, including hip-hop album of the year, followed by Roddy Ricch with 11 nominations. Megan Thee Stallion and Drake were each nominated for eight awards.

THE SOUL OF AMERICA 9 p.m. on HBO. This documentary examines U.S. history as it pertains to the current political climate. The writer and historian Jon Meacham looks back at some of the nation’s biggest challenges — including the women’s suffrage movement, the incarceration of Japanese-Americans during World War II, McCarthyism and the Civil Rights movement — to understand how it has come up against forces of hatred and division. In addition to Meacham, the film features insights from Lisa Tetrault, George Takei and Representative John Lewis, who passed away in July.

THIS IS US 9 p.m. on NBC. The Pearson family returns for the fifth season of this drama, catching up with siblings Kevin (Justin Hartley), Kate (Chrissy Metz) and Randall (Sterling K. Brown), and revisiting moments in their past as they search for fulfillment in the present day. On the premiere, the trio celebrates their 40th birthday.

BURNING OJAI: OUR FIRE STORY 7 p.m. on HBO. In December 2017, the Thomas Fire raged through the California town of Ojai, destroying nearly 282,000 acres of land and devastating the area’s homes and businesses. In this documentary, the filmmaker and Ojai resident Michael Milano follows residents who were directly impacted by the wildfire, as well as the town’s repair efforts.

THE BEST MAN (1964) 8 p.m. on TCM. This film adaptation of the 1960 play chronicles a contentious political battle for the presidential nomination. Directed by Franklin J. Schaffner and written by Gore Vidal, the film follows William Russell (Henry Fonda), the intellectual former secretary of state, and Senator Joe Cantwell (Cliff Robertson), a populist and ruthless opportunist, as they try to win over voters and secure endorsements. “Mr. Vidal shows us how a dirty political fight can destroy our best presidential aspirants,” Bosley Crowther wrote in his New York Times review at the time. “It’s something to think about.”

SUPERSTORE 8 p.m. on NBC. This workplace comedy — which follows the employees of the fictional megastore Cloud 9 — returns for a new season. On the premiere, Amy (America Ferrera) tries to instill some order among the store’s employees as they grapple with how the coronavirus pandemic will shift their duties and work culture.

BEFORE DAWN (1933) This thriller follows a clairvoyant, a police detective and an Austrian psychologist as they hunt for $1 million hidden by a recently deceased gangster. After an old woman mysteriously dies in the house where the loot is said to be hidden, a detective, Dwight Wilson (Stuart Erwin), enlists the help of a clairvoyant woman, Patricia Merrick (Dorothy Wilson), to solve the murder and find the money before anyone else does. In his New York Times review, Mordaunt Hall wrote, “There are enough killings and accidental deaths to satisfy the most ardent enthusiasts of such thrillers.”

CITIZEN BIO 9 p.m. on Showtime. This documentary, directed by Trish Dolman, takes a deep dive into the world of biohacking — embraced by a community that believes advances in gene-editing technology make it possible for people for perform genetic experiments at home, often augmenting their own bodies to create experimental drug therapies and treatments for diseases. The film also looks into the life and work of Aaron Traywick, a self-proclaimed biohacker who was mysteriously found dead at the age of 28.

Julie Harris in “The Haunting.”Credit...Metro-Goldwyn Mayer, via Everett Collection

THE HAUNTING (1963) 6 p.m. on TCM. In honor of Halloween, Turner Classic Movies has an all-day spooky-movie lineup that includes this horror film, directed by Robert Wise. It follows an anthropologist who heads off to conduct an experiment at a decrepit mansion in New England said to have supernatural powers. Once there, he and his team begin to experience terrifying, unexplained phenomena. The movie was based on Shirley Jackson’s 1959 novella, “The Haunting of Hill House,” which also influenced the Netflix series of the same name. Earlier in the day, you can catch DR. JEKYLL AND MR. HYDE THE PICTURE OF DORIAN GRAY DR. STRANGELOVE (1964), follows at 8 p.m.

THE COMEDY STORE 10 p.m. on Showtime. This five-part series, which looks back at the history and legacy of the Los Angeles comedy venue the Comedy Store, comes to an end.

Romelu Lukaku: one and a Half years at Inter are the best in my career
Bulykin on Loko's chances of reaching the Europa League play-offs: it Will be very difficult to do anything
Joao Felix: Atletico are missing Suarez and Costa
Loko didn't know what to do when Red Bull scored first. Naumov about 1:3
Gasperini about Atalanta: we will Go to Amsterdam with a small advantage
Striker Berisha Of Salzburg: We were better than Loko and deserved to win
Pep on city's 1st place in the Champions League group: we played very well in all the matches
Source https://www.nytimes.com/2020/10/26/arts/television/whats-on-tv-this-week-this-is-us-and-the-haunting.html