Winter Sports Athletes Are Crisscrossing Europe for Races. Is That a Good Idea?

With coronavirus infection rates rising dramatically, this may not be the best time to begin a series of competitions that require moving hundreds of people across Europe during the next few months.

And yet, that is exactly what is happening as winter draws closer, temperatures drop, and the international winter sports schedule gets underway. Alpine skiing kicked off in Soelden, Austria, last weekend. Nordic skiing, biathlon, and sliding sports (bobsled, luge and skeleton) are scheduled to begin next month.

There are testing protocols, reservations for lengthy stays in European chalets and contingencies for a coronavirus outbreak. There are also a lot of athletes and coaches crossing their fingers and hoping that the plans and rules they have agreed to will keep them safe, even as they watch the virus surge again across Europe and rules shift each week for testing and quarantining visitors.

“It’s just an ever-evolving situation,” said Chris Grover, director of cross-country skiing for U.S. Ski and Snowboard, the national governing body for those sports. “It’s a lot to navigate.”

Unlike most domestic sports leagues, which play in one country for their entire season, the winter Olympic sports function as traveling circuses, moving largely across Northern and Central Europe from November until March. Competing on different slopes, and trails and tracks is an essential characteristic of each sport. Creating an N.B.A.-style bubble, or multiple bubbles, would be virtually impossible.

That said, these sports will require athletes, coaches and support staff members to do exactly what medical experts have been trying to get people not to do since March — spend lots of time in large groups, go into even larger ones for competitions and travel internationally.

While tennis and golf have contended with similar challenges, the World Cup tours for the winter sports create a level of risk that may be higher, especially if infection rates continue rising.

“I think we are going to be OK, not without infection or incident, but we have really tight controls to deal with something should it come up,” said Tiger Shaw, the president and chief executive of U.S. Ski and Snowboard.

In a statement, the International Ski Federation said executives had worked closely with event organizers and medical experts to create the safest possible environment.

“Every site must implement and follow strict hygiene and protection plans and every accredited stakeholder must respect these rules,” the statement said. “We had a positive start with last weekend’s races in Soelden and will continue to work for similar results as the season progresses.” 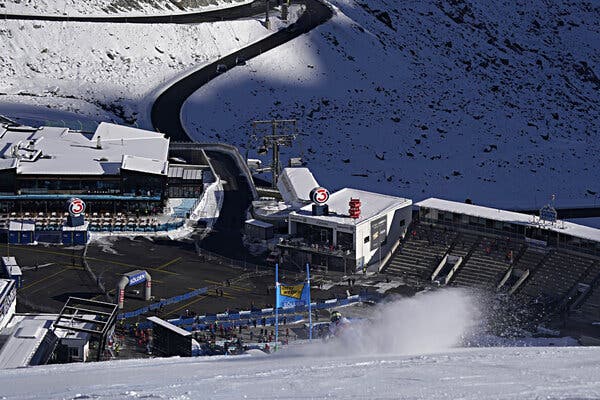 Ted Ligety of the United States at the World Cup event last weekend. “I think we are going to be OK, not without infection or incident, but we have really tight controls to deal with something should it come up,” said Tiger Shaw, the chief executive of U.S. Ski and Snowboard.Credit...Francis Bompard/Agence Zoom/Getty Images

Federation rules require anyone entering a ski venue to have had a negative test during the previous 72 hours. Athletes are being asked to remain separate from the technicians who manage their equipment, a famously social bunch that can spend hours working in cramped spaces near technicians from other countries. Everyone will remain separate from the news media, and try to remain apart from the general public in hotels.

It is not clear how many skiers or members of their support staffs would have to test positive for organizers to shut down an event, but if athletes from 70 percent of the participating nations are negative, races will continue.

The International Biathlon Union, in addition to adopting similar rules to limit travel in its World Cup tour, also contracted its schedule, holding its first six events at just three locations, rather than at six in five countries.

“We’ll do doubleheaders,” said Max Cobb, a member of the I.B.U. board and the leader of U.S. Biathlon. “And we will probably be entirely or nearly without spectators all season.”

The logistics and mental challenges are placing a special burden on North American athletes. They did not travel to train on snow this summer as they usually do and will not be able to return home during brief breaks in competition or receive visits from friends and family.

“I am trying to get into a marathon mind-set and approach it in a way that is mentally sustainable,” said Susan Dunklee, the top American biathlete. “It’s an adventure.”

The Alpine team got a taste of what the winter holds over the past month. To prepare for the opening races in Soelden, much of the U.S. Alpine team headed to Austria in late September. The athletes were tested just before they left and once they arrived, and they were tested every three or four days since then.

Ryan Cochrane-Siegle, the veteran speed specialist, said the team largely kept to itself in Austria, where he was surprised to see so few locals wearing masks. They stayed out of restaurants and coffee shops and made quick jaunts to markets.

The skiers also tried to limit the usual camaraderie with skiers from other countries, even when they were training on the same slopes.

“We don’t know about their bubbles and what their situation is with testing,” Cochrane-Siegle said. “There is no mingling, which is too bad, because that is one of my favorite things.”

Grover, the cross country director, spent last week speaking with officials in Finland, site of the first event, about entry regulations. Athletes will be tested upon arrival, then will have to quarantine for 72 hours and then take another test. They will be able to train outside during the quarantine.

“That is key,” Grover said. “With this level of athlete, you can’t make them sit around for 72 hours.”

Next he has to reach an agreement on another series of protocols with officials in Norway, where the second event will take place.

Athletes will be assigned one roommate for the season, rather than rotating (a practice that keeps two skiers from getting sick of each other). They will have to take all their meals and coffee breaks in the hotel in which the team is staying. Grover is trying to figure out how to ensure athletes will be able to get some “alone time” without putting everyone else in danger. The usual visits to museums or cafes are not in the cards.

“The risk is so high,” he said. “We are potentially talking about not just you, but the team and the whole World Cup.”

The sacrifices are not small.

Jessie Diggins, the cross-country skiing champion, got engaged recently but will not be seeing her fiancé for nearly five months, and her family will not be able to visit at Christmas as they usually do. She has been working all summer with a sports psychologist about how to excel while only being able to socialize with a dozen or so teammates and coaches from November to March.

She and her teammates have been talking about making sure to be extra sensitive about not bringing the rest of the group down after a bad race, or carrying on after a good race if someone else has a bad one.

“You can’t read someone else’s mind,” she said. “But let’s be kind and courteous and support one another because we are taking our bodies to extremes.”

Dunklee, the biathlete, said she was not sure exactly how she would compensate for habits she has long taken for granted. If she is supposed to limit direct contact with the technicians, how exactly will she choose the right wax for her skis? Can she stay sane and healthy trying to make everything work?

“It’s been an interesting year to balance what we need for physical health and balance the mental health, and make sure people are in a sustainable place,” Dunklee said. “We have to be able to live a life and do it safely.”

Tuchel after 2:2 with Bordeaux: I always protect the players, but I refuse to do this. You can't play matches of this level
Ole Gunnar Solskjaer: Any decision I make is for the good of Manchester United. The main thing is the result
Mourinho on Tottenham: We don't have the same conditions as some clubs. They create a crazy market
Hazard was injured for the 8th time in 16 months at Real Madrid. He had 12 injuries in 7 years at Chelsea
Frank Lampard: Abramovich is a man who achieves his goals. Without this, it is impossible to achieve his position
Marcelo was actually grabbed by the hair. Clear penalty. Ex-referee Iturralde Gonzalez on the controversial episode in the match of Real Madrid
Gasperini on Atalanta's defeat: the Players are tired. We pay more for national team games than for the Champions League
Source https://www.nytimes.com/2020/10/23/sports/skiing/covid-skiing-world-cup.html